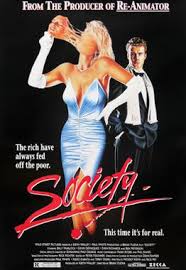 We kick this off with Bill Whitney (Billy Warlock) as he comes through a door. We hear some inaudible noises and he goes into the kitchen. He gets a knife and goes to the front door of the house. Nan (Concetta D’Agenese) is his mother and she asks him what he’s doing. Billy is going to see a Dr. Cleveland (Ben Slack) who is a psychiatrist. Billy is struggling as he thinks his family is against him and when he bites into an apple, he sees a bunch of worms. This is establishing early that he might be an unreliable narrator.

This cold open ends with the opening credits. There are images in the background that are alluding to something that will happen later. We are also getting the theme song which is oddly catchy.

Bill is on the basketball team and there is a game that night. He’s hanging out in the driveway with his friend Milo (Evan Richards). A van pulls up and Bill calls out to his sister Jenny (Patrice Jennings) to alert her that a David Blanchard (Tim Bartell) is there. She tells him she doesn’t want to see him and to get rid of him. Billy goes about finding where he is.

Coming up is Jenny’s coming out to society party. Her parents of Nan and Jim (Charles Lucia) are excited. Billy won’t be going as he has a basketball game. We get moment where his parents don’t seem to like him as much as Jenny. This is another part of going back to this aspect of the movie.

Billy is also up for class president. He’s debating against Petrie (Brian Bremer) who is part of the society. Ted Ferguson (Ben Meyerson) and his friend Clarissa Carlyn (Devin DeVasquez) are trying to distract him and it works at first. That is until Billy’s girlfriend of Shauna (Heidi Kozak Haddad) scolds him from the audience.

The title of this movie is fitting. Billy continues to go see Dr. Cleveland to help him with the issues he’s going through. Billy gets into a fight with Shauna as they weren’t invited to a party thrown by Ted. She badly wants to go as she is worried about being part of the society. Blanchard also pulls him aside to play a tape he recorded illegally of Billy’s family. What he hears on it is pretty disturbing and makes him question them even more. The problem is when he takes the tape to Dr. Cleveland, it sounds like a perfectly normal conversation. What is really going on with these rich elites or is Billy just disturbed?

That’s where I want to leave the recap and I’ll start off stating that I’m going to try to not go into spoilers if I can help it. This is a movie that I think you need to come into knowing a bit of what you’re getting into. I will say though, it wasn’t as bad as I was expecting it to go.

First thing is that this movie is very relevant right now. From what I read, the original idea for the movie was going to have the rich killing poor people, but Brian Yuzna wanted to take it farther and that is what he did. This movie is really showing how the world is where the rich are built on the backs of the poor and ‘absorbing’ them. There is an interesting line dropped that to be part of society, you need to be born into it. You can’t just join. Billy keeps saying that he thinks he was adopted and that really seems to be the case here. Clarissa is scolded by Ted for falling for Billy, because he is a ‘lesser’ being compared to them. They also don’t have that much touch of reality. In their case though, they really don’t need it. They are rich and powerful and can do whatever they want. This is an idea that is very socially relevant now.

This movie is listed as a comedy, but it really isn’t in the sense of laugh out loud type of funny. The comedy we get is the satirical nature and just how weird some of the characters are. Examples are like with Clarissa with some of things she says, her mother is odd in Mrs. Carlyn (Pamela Matheson) and just some of the outrageous things that happen. I did want to toss that out there before coming in thinking this is an out and out comedy.

The last aspect to the story I wanted to cover would be the unreliable narrator. I’ve brought this up a couple times and I love that Billy sees or hears weird things. To go with this theme, for the most part he’s the only one. Dr. Cleveland, Nan, Jim, Jenny and whomever else he reaches out to keep trying to convince him it is all in his head. We as the audience know something is up, but since this is really from his point of view, we can’t confirm this. It all comes to a head in the end, but I like that route the movie decided to take.

This movie really doesn’t delve into much outside of that so I’ll take it next to the acting. I don’t think Warlock is a great actor, but he does portray the unreliable narrator well. It does feel like he overacts a bit though. D’Agnese, Jennings, Lucia and the rest of the rich elites are all fine. They tend to overact also, but I think that actually works here since it helps with their sense of arrogance. I like Richards and Bartell. Jennings and DeVasquez are both quite attractive. There some nudity, but a bit of it gets weird as well.

I couldn’t get through this without going into the effects. I knew this movie was eventually going to get real weird. We get a taste of that during the opening credit sequence. When I saw Screaming Mad George’s name, I was really excited actually. He’s a legend and from what I read, this movie was based around what they could and couldn’t do with practical effects. You can see to an extent with how wild they go, it looks really good. During the climax, I like that they use a red light to accentuate what we’re seeing. It adds a creepy vibe for sure. Aside from that, the cinematography was solid.

Now with that said, this movie is pretty wild. I really like the social commentary it is giving us and it is still socially relevant even now. The acting I thought was a bit over the top, but being that this is a satire, that makes sense. The effects though were on point and pretty wild to see. It didn’t go as far as my imagination was preparing me for though. I dig the theme song and the rest of the soundtrack fit for what was needed. Overall I’d say this as an above average movie. It won’t be for everyone, but if you handle the effects it is a fun movie.