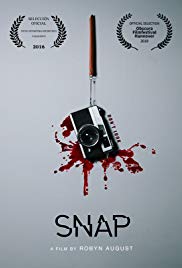 I had the opportunity to check out to two short films from Robyn August. He reached out to me and I’m always down to help independent filmmakers. The first one I watched was Snap. The synopsis is a man (August) finds a vintage camera heirloom in his closet. He begins to take snapshots of his apartment when suddenly a mysterious woman appears through the lens, leading him to a horrifying discovery.

Now if you’ve ever read one of my reviews for short films, they kind of fall into two categories for me. Is it a complete story or is there more that could be explored here. In this case, I definitely think it is the latter. As the synopsis states, he makes a horrifying discovery and even though it is subtle, I want to know what the pipe and why the object this entity is holding is dripping water. I do think this is one that could be expanded out.

The editing of this short is very well done. The cuts of the film really do help to build tension and it doesn’t waste any time getting into it. I definitely find it creepy that at first, the man notices the entity when looking through the lens, but it’s gone when he looks up. This is one of my biggest fears. There isn’t any filler and it builds tension to a satisfying ending.

Acting was solid for this. Neither of the actors blew me away, but with the length, they didn’t need to. I thought the August, who plays the man in the short, shows enough fear and the look of the entity was quite creepy for sure.

Something I really wanted to talk about would be the effects of this short. They are amazing. Seeing the entity through the lens looked amazing and then being gone when we look up was seamless. The chair, the actor and the camera moving without someone touching it was great. I also thought the look of the entity was as well. This short also looks beautiful.

Now with that said, I would recommend giving this short a viewing. I thought that it has an interesting enough story for the length of this short, but there is potential for more here if the director decides to expand it out. It does well at building tension to a satisfying conclusion. The acting was solid. The effects and how it was shot were both amazing. The score was also fitting for what they needed. I will share the link below if you decide to check this out, but I definitely think this is a good short for sure.

Now for the second short, this one has a dog (Sriracha) staring into the bathroom in an apartment. Its owner, Jennifer Willens, tries to convince the animal there’s nothing in there. She turns off the lights and shuts the door. Something opens it back up though.

Much like the first one, I do think that there is something more that can be expanded on if August decides that is the route he wants to go, he definitely could. This is another concept that terrifies me. I’ve grown up with dogs, who would randomly bark at things, which can be terrifying at night. I currently have a cat, who acts similar to this dog, in that it will stare at things. It makes even wonder at times if there is something there. As for this short, I would be fine with seeing this expanded to explore what opened the door.

I think the pacing is solid. What I really enjoyed was seeing this animal staring into the bathroom, which is harmless. We even see Jennifer looking in to see if there’s anything there. This is harmless and something we do. It really starts to build tension when we hear the door open. Her going to investigate keeps driving the tension to a satisfying conclusion as well.

Acting for this one was solid again. Willens I think does well at being natural at first, but when the door opens, I think there is enough fear of the unknown. At the conclusion she also does well. I also have to commend Sriracha. I’ve worked with a cat on a film set in the past and it was quite the pain to just get one shot. When it works out it is magical. This dog seemed much easier to work with and was quite cute as well.

There were fewer effects used in this one. I did like what we see coming out of the bathroom as one of the last images. It looked good for sure and I think hiding it as much as they do is something that really helps there as well. This film is also shot very well. I like the angles which include going down to the dog’s level. That was a good touch.

Now with that said, this is another short that I think the length it is at is good. If August decides to expand it out, that is something I would be interested in seeing as well. Acting for this was good as was the pacing. The conclusion of it was solid. The effects used looked good and it was shot beautifully. The score definitely fit for what they were going for, which is also a plus. I would definitely recommend giving this one a viewing as well. I will include a link below this review for this short as well