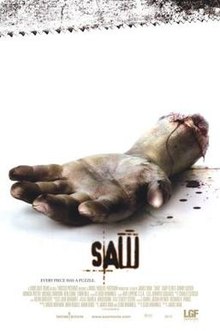 I remember the first time I saw this film was actually in the theater. My friends and I were out to eat and we decided to go see a movie. I fought hard to see this one, even though one of them hates horror movies. We were all blown away by this and the reveal at the end. I actually don’t know the last time I saw this first one all of the way through, but it has been awhile. It is odd though, I’ve actually caught this twice within a month of each other. The synopsis is two strangers, who awaken in a room with no recollection of how they got there, soon discover they’re pawns in a deadly game perpetrated by a notorious serial killer.

As our synopsis states, we see Adam Faulkner-Stanheight (Leigh Whannell) freak out as he wakes up in a bathtub full of water. We see something glowing go down the drain before he gets out. He’s in a dirty bathroom. He soon realizes that he’s not alone. Across the room is Dr. Lawrence Gordon (Cary Elwes). There is also a man in the middle of the room, dead. He shot himself and there’s blood spreading away from the body.

Neither man knows each other nor how they got there. Lawrence finds the light switch and they look for clues. Both men find an envelope with a little tape in it in their pockets. In the middle of the room, the dead man has a tape player in his hand. Adam gets creative in getting it and each listens to their tape. This is the beginning of clues they find that tell more about each other and about the game they’re stuck in from the serial killer, Jigsaw.

We are also given flashbacks and things that are currently happening as well. There is Detective David Tapp (Danny Glover) and Detective Steven Sing (Ken Leung) that are investigating the previous murders. There is also Lawrence’s family of his daughter Diana (Makenzie Vega) and wife Alison (Monica Potter). The final part of the game for Lawrence is that he has to kill Adam before six or his wife and daughter will die. What will these men do and why are they in this game together?

Having now given this a rewatch with a more critical eye and knowing the reveal, this film still really holds up for me. The mystery that we get here is really good and even though we learn more about Jigsaw as we go, in this film the people he is punishing aren’t necessarily good. It gives a bit of vigilant justice. It isn’t his place to do it, but with what he is facing, he wants these people to be better.

To focus for a second on what is going on in the room. I think the mystery there is good. We get little things that happen that lead to the next and we learn more information as we go. That actually really works for me. I like that neither guy trusts the other one. They call each out on it as they continue to hide secrets. I believe that they might not remember everything after being drugged, which is definitely a realistic side effect.

I don’t even mind the other stories going on around this one either. Learning more about Jigsaw through the other games he set up is a nice touch. Seeing Detective Tapp fall into madness in trying to stop him is something else that I could buy. It is interesting though that something bad happens when he doesn’t go about the proper protocol, yet he continues down that dark path.

Now I will admit, this is a bit lofty of things to go as right as they do. It is interesting that at the time of this original film, there is only one survivor of these games, which is Amanda (Shawnee Smith). That is realistic, but there are so many moving parts that you’d think it would fail. Not everything goes completely according to plan though either. Just some thoughts I had on the overall premise.

This will shift me to the pacing of the film, which is on point. We get this eerie feeling as we see these two guys wake up. The more we learn about who could have possible put them there, what he’s done previously and the room they’re in, it starts to build tension. We keep seeing this clock as it nears 6, knowing full well that if it does, Lawrence’s family will die. To make it worse, we see the person holding them hostage. I thought the ending was great and the first time I saw it, the reveal blew me away. The only issue I really have in this section is editing. We are given a flashback in a flashback. We have to jump into the past quite a bit, which it does work, but it does get a bit tedious if I’m honest.

I’ll move this to the acting next, which overall it is fine. I thought Whannell plays his role very well. I like the change that comes over him as we learn more about his character and it is heart wrenching to see him at the end as well. Elwes is someone I’m disappointed in here if I’m honest. I think he’s a good actor and for most of this movie he is as well. An emotional scene late in this one though he really dropped the ball and I thought it was pretty bad as he seems to be overacting. I liked Glover and his descent into madness to stop Jigsaw. Leung, Dina Meyer, Smith and Potter were all fine as they rounded out the film for what they needed.

This takes me to the effects, which again for the most part I thought was pretty solid. This is a low budget film, but it has such a gritty feel to it. The traps we see are set up in a way that is unnerving and realistic looking. The iconic reverse bear trap is great. I even like the Billy doll that Jigsaw uses. It is quite creepy if I’m going to be completely honest. The only gripe I have is there’s a lot of shaky movement for the camera. It is mostly used when time lapsing with what happens in traps, but I’m just not the biggest fan. It’s shot well aside from that.

The last thing to cover would be the soundtrack, which I thought was on point. The theme song to this film and series is great. I’m a big fan of it and actually have listened to it when writing before. I think the rest of the score doesn’t necessarily stand out, but it definitely fits for what was needed and helping to enhance the feel of the scene.

Now with that said, this film definitely holds up even after multiple viewings. I think this is one that the first time you experience and then viewings after to piece together what is really going on here. This has such an interesting and scary concept. I like the mystery that builds with this two guys and the deeper story we learn with what is happening outside of it as well. It builds tension along with the mystery that I said, I just do think that the editing is a bit tedious with the cutting to the past. The acting is good aside from a subpar performance from Elwes, which still surprises me. The effects were good, again aside from some shaky camera effects. I really like the main theme and the rest of the soundtrack works. Overall I this is a really good movie and definitely an iconic one from the 2000s if you ask me.