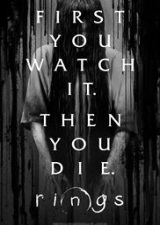 This film begins with a man on an airplane. He is nervous about something and a girl across the aisle asks him what is wrong. The guy is Zach Roerig and the girl is Laura Wiggins. Roerig tells her that he met a girl in Seattle, she showed him a cursed tape and he only has seven days to live. The seatbelt light is on, but he gets freaked out and goes to the bathroom. Wiggins’ friend asks what happened and she freaks out as well, she is Lizzie Brocheré. She goes after him and pounds on the door of the bathroom. All of the monitors on the plane turn to the well from the original film.

We then cut to a flea market 2 years later. A woman, Aimee Teegarden, is looking at an old VCR. A man comes up to it and states if she isn’t going to buy it he will. Teegarden reveals that she learned it belonged to a guy who died in a plane crash. The man who wants to buy it is Johnny Galecki. He works on it back at his place when Teegarden is leaving. Galecki removes a tape from it that says ‘Play Me’.

We then meet a couple. The guy is Alex Roe. He is packing up to go to college. His girlfriend is helping; she is Matlida Anna Ingrid Lutz. They Skype every night and we jump about six weeks into the future. There is a night when Lutz is being ignored and a woman appears on his Skype. Lutz decides to drive to the college to find out what is happening. Roe won’t pick up his phone and Lutz goes into his dorm room. This leads her to one of his classes, taught by Galecki. She asks him about Roe, but he doesn’t seem to know who he is. She follows him after class and sees him get into an elevator. He takes it to the 7th floor. She tries to follow, but the button won’t work. She had found a key in Roe’s room and tries it. Then it does.

On this floor she finds a report that Galecki has wrote. She flips through it to find images of Samara, the specter from the previous two films. Inside a room she finds Teegarden, and two guys who interrupted one of her Skype sessions with Roe. She ends up going back to Teegarden’s place.

Teegarden is freaking out and wants Lutz to watch a video. Lutz sees Teegarden’s phone and Roe contacted her, telling her he has a new number. She tells him that she has Teegarden’s phone. He tells her not to watch the tape that Teegarden is trying to show. Lutz ends up being locked in the bathroom when Samara, Bonnie Morgan, comes for her. Roe shows up and leaves.

Lutz knows that Roe’s time is running short so she watches the tape. It is different for her though. She also has an odd vision of a metal door and a cross. She gets a burn on her hand and it happens with the phone. She now has seven days to figure out what is happening before it is too late.

Galecki tries to a make a copy of the tape to help her to show it to someone else. There is an error in doing this and her file is much larger. He states that there are more images hidden within it. Lutz watches it and starts to check into what they could mean. This leads her to the back-story of Morgan. It takes them to a small town where a blind man played by Vincent D’Onofrio lives.

Can Lutz solve the mystery and end the curse? Or will she become another victim of it?

I want to lead off stating I loved the original Ring film. It got me into checking out the Japanese version and was my introduction to J-Horror, which I am a fan of. What I liked about the original was it was scary while also giving a great story and learning the story of what happened to this poor girl Samara. This film goes back to that by having the back-story of Samara and her real mother. My problem with it though, is that it violates what happened in the original and almost completely ignores the sequel. Naomi Watts finds bones in the bottom of the well, but this film claims that she is buried in this other town that she came from. If they are going to do this, I want it better explained, because as it sits I don’t like the changing of the continuity. With that said though, I do like that the tape introduces new images for Lutz and Roe to investigate and I liked that we finally learn about Samara, where she comes from and who her real parents are. I also really liked the ending as well, even though it is a little bit horror film cliché, especially for this series.

I thought the acting for this film was pretty solid. Lutz was good as the main girl who is trying to get to the bottom of what is happening. I thought she looked great as well. Roe was solid as her boyfriend. I thought his reasons for ignoring her were a little weird, but I will let it slide since it built mystery and tension. Galecki was solid as the arrogant professor. D’Onofrio is great in his role. He just has a presence about him that I really like in most everything he does. I liked Teegarden in this film as well, which is finally good to see her grown up since Friday Night Lights the television show. I also thought Morgan was solid as Samara.

A big thing I wanted to touch on for this film was the editing. There are a lot of images in the tape and it is hard to remember them all. I love that this film as well as the original edit the reveal of the next clue and is splices it so we see what it looked like on the tape. I think that is very helpful. I thought the make-up and the effects for Morgan were solid. The way she moves is creepy to begin with, but they make her look scary. I thought the soundtrack did well to sync up the mood of the film as well.

Now with that said though, I was slightly disappointed with this film. As stated, I was a huge fan of the original, so it does have big shoes to fill. My biggest problem is the plot holes this film creates by changing things that happened in the original. I did like the ending even though it is a cliché these films use. I thought the acting was good across the board with D’Onofrio stealing it. I liked what they did with the editing. The expanding of the images on the tape was a good touch. The make-up and effects were solid. The soundtrack was good as well. This film though is just slightly above average unfortunately. I would recommend this if you love the series, but the original film is the best hands down.