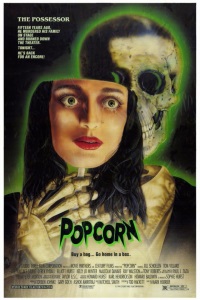 This was actually a film that I remember seeing the video case at the movie store, but for whatever reason, I never rented it. It wasn’t until I started to listen to podcasts that I heard them talking about this one and how fun it was. I finally got around to seeing it as part of a Top 10 Summer Series for the 1990’s over on The Podcast Under the Stairs. The synopsis is a murder begins killing off teenagers at a horror movie marathon they have organized in an abandoned theater.

We start this off with some odd images. We see a bearded man with a sword and there is a little girl as well as a woman that is tied up. It then shifts to Maggie (Jill Schoelen). We see this is a dream and she wakes up from it. She uses a tape recorder to make sure she remembers the images she saw. Leaving her room, we meet her mother Suzanne (Dee Wallace). Maggie goes off to college as she has an early class.

On her way there, she runs into a guy that kisses her, Mark (Derek Rydall). He is in love with her, but she doesn’t have time for him at the moment. She is determined to get this movie written that she keeps dreaming about. Her early class is actually a film one. It is taught by Mr. Davis (Tony Roberts). In the class with her is Toby (Tom Villard), Bud (Malcolm Danare) who is wheelchair bound, Leon (Elliott Hurts), Joannie (Ivette Soler), Cheryl (Kelly Jo Minter) and Tina (Freddie Simpson). They have to change the location where they edit their films, but Mr. Davis and Toby came up with an idea to raise money. They’re going to take over an abandoned movie theater to show low-budget horror and sci-fi films as an all night event. Everyone isn’t onboard at first, but come around with the logic arguments made.

We see as they plan and put it into motion with the help of a local film historian Dr. Mnesyne (Ray Walston). As they’re finishing up, they find a reel of film that states to not open it. As they watch it, Maggie realizes the images on it are what she has been dreaming about. She passes out and when she wakes up, Mr. Davis fills in what they were watching. Maggie knows there’s a connection between it and her dream. When she tells her mother, she doesn’t want her involve with this movie marathon anymore. We also get the feeling that she is involved somehow. She has been getting odd phone calls and she gets one that night after Maggie goes to bed that tells her to go to the theater.

The event kicks off without a hitch, until an odd bearded man shows up and it gets Maggie intrigued to follow him. Her friends and teacher are then killed off with some creative ways with the gags the films they are showing. Who is this killer? Is it the man from the film that has been haunting Maggie’s dream or someone else?

I do have to admit, after finally seeing this film I have to agree it is a lot of fun. This came in at the tail end of the slasher era, but it does have one of my favorite final girls in it, Schoelen. There are definitely some interesting aspects to it for sure. I love the idea that the setting is an abandoned movie theater that has been restored enough to host this event. I like it even more that they’re showing schlocky horror films like you’d see from William Castle with gimmicks. To go even farther, the killer is using some of these to kill his victims. My only issue is that they abandoned this a bit earlier in the film than I would have liked.

We really get a couple of generic slasher ideas in that we either know who the killer is and we are just enjoying the mayhem. The other is to be more like a giallo and we have to figure out who the killer is, which we get here. The idea of the dream that Maggie is having and trying to piece it together with the film they are making and why the murders are happening I found to be pretty interesting. Even the reveal was good, but I almost feel like they did it a bit too early, because the film falters after that.

Since I’m alluding to the pacing a bit, I might as well tackle that now. I do have to say that I really enjoyed the set up to the film. I’ve already said how much I enjoyed the setting and I think the mystery was pretty solid as well. It is later in the second act and into the third act that the film kind of loses its way a bit. I do think that the ending is satisfying for what we’ve been building to though. For that I have to say that the pacing overall is decent, there are just not enough characters that I’m worried about what happens as they aren’t placed in danger.

Speaking of the characters, the acting for the film I think is pretty solid for a slasher film. I’ve already said that I love Scheoelen and this film does nothing, but continue to build on it. I find her to be absolutely attractive and I love her drive in the movie. She is determined to make the movie that is haunting her and I just wish I had that passion to create like she does. Villard is solid as well. His character has an interesting arch as the film progresses that I didn’t really expect. Wallace is just a legend and I liked her small role in the film. The rest of the students were solid. Shout out to Simpson, Minter and Walston in their roles as they’re all actors and actresses I’ve seen in other things as well. I would say the rest of the cast rounded out the film for what was needed.

For as bad as I thought the effects were in the 1990’s, early on in the decade they were still sticking with practical. The only time I can remember some kind of computer generated would be the electrocution scene, which didn’t bother me in the slightest. The look of the killer is great and the concept used there was pretty solid I would say. The blood we get looked good and the setting is amazing. The film was also shot well in my opinion.

Now with that said, this film is definitely one that I enjoyed. It does come with its flaws, which for me is that they decided to go part comedy here. I almost feel this would have been better if they would have just played it straight. I do like the story and concept of why the killer is doing what they are. I do think that it just loses its way late in the second act and into the third. The film still has a solid conclusion. Setting for the film is great, thought the acting was above average and the effects were pretty solid as well. The soundtrack of the film really didn’t stand out to me, but it also didn’t hurt the film. Overall I’d say this film is above average and not a bad slasher from tail end of the craze for that genre.