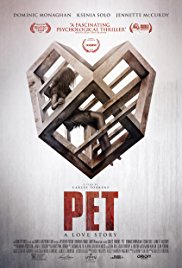 I was turned on to this film from some of the horror film podcasts that I listen to when this film was making its film festival circuit. I knew the premise that he kidnaps the woman and keeps her in the cage, which I was on board for. The official synopsis is a psychological thriller about a man who bumps into an old crush and subsequently becomes obsessed with her, leading him to hold her captive underneath the animal shelter where he works. But what will the victim have in store for her captor?

This film is so much more than that though. I absolutely loved the reveal. I didn’t see it coming and I was all for it after that moment. I’m a big fan of films that have two characters, who have done equally horrible things and you have to choose who is worse. Seeing the effects of this on both of them was great. I also love the obsession it is showing as Seth’s (Dominic Monaghan) life is falling apart around him. It comes off as realistic and builds tension. I also like how the film plays out in the end. The payoff is a satisfying end to the build up.

The acting was really good as well. Monaghan plays this role perfectly. I can feel the awkwardness coming off of him. I can also feel the strain at what Ksenia Solo is telling him to do while she is being captive. It is great to see his power drain from him as she slowly takes it. This brings me to Solo, which I thought she did great as also in her role as well. I wasn’t expecting the twist and when it happened, her change in character to reveal it was one of my favorite parts of the film. Jeanette McCurdy also plays an interesting role at the reveal as well. She doesn’t have a lot of screen time, but I thought what she did was solid in support. Da’VoneMcDonald is also great bringing a little bit of comedy that is needed for a film like this. The rest of the cast I thought round out the film well.

There aren’t a lot of effects in the film, but the ones that are used do look to be practical. I’m glad they went this route, because I definitely feel that it helped strengthen the film. I felt they looked real and I was a big fan of that aspect. The blood and gore was good. The editing of the film was good. I thought the film does a solid job in building tension that we need. I wanted to know what happens next. The score of the film was also very well done. It helped to build my anxiety which I enjoyed.

Now with that said, I would recommend seeing this film. This one seems to have kind of flown under the radar as I haven’t heard a lot of people talk about it. I thought the concept of the film was good and the twist is great. The ending is worth the build up we get. The acting of the film was solid across the board. The effects are really good and the editing is as well. The film builds the necessary tension and it had me locked in. I also thought the score was a good touch also. I feel that this is a good film and worth a viewing if you like films of kidnapping where there’s a much darker secret being hidden.