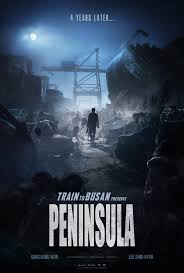 Now this was a movie I wasn't entirely sure how it was going to work out. I really liked Train to Busan and didn't really know where you could take it for a sequel. Regardless, it was the second movie I've seen since the theaters have opened during the COVID pandemic that we're still experiencing at the time of writing this. The synopsis is a soldier and his team battle hordes of post-apocalyptic zombies in the wastelands of the Korean peninsula.

We start this movie off right at the beginning of the infection. We're with Jung Seok (Dong-Won Gang) as he's with his family. They're trying to flee to a ship that will allow them to escape this nightmare. With him is his brother-in-law, his sister and their son. The route they're taken goes through a wooded area. They pass car wrecks and one that includes Min Jung (Jung-hyun Lee) and her family. They don't help them and just drive past.

They boarded on to a large vessel for a sea voyage. Jung's sister is worried about how long they're on the water and that they should be to Japan by now. Jung goes to check and see the infection has made it on the ship. The Americans that are in charge do not want to reveal information, but tragedy strikes. Jung needs to make a tough decision that will not only affect his life, but his brother-in-law's as well.

It then jumps 4 years into the future. The movie gives us an interesting way of progressing through reports on television and an interview. It is revealed that this infection started in a laboratory and got released. The movie speaks of a merging back to one Korea, but it happened before that which is suspect. The lower half of the peninsula is quarantined. Jung is struggling with what happened and those from South Korea are shunned by the people in Hong Kong. That is where they were relocated.

An opportunity arises where a crime boss, Geoffrey Giuliano, wants 4 refugees from South Korea to go back and recover a large sum of money. There is a truck that has money in the back, but the driver stopped responding to messages. Jung has military training and he seems interested in going. The incentive is that they really have no rights here and the 2.5 million US dollars would allow them to make their own way. The plan is to recover the truck, call from a satellite phone and get out of there. They are given weapons and roughly where the truck was the last time they made contact.

Things seem to without a hitch until we see they're not alone. We see there are two young girls watching them from a nearby building, but how are they surviving out here? There also seems to be a military unit as well and they're not so nice. There time isolated from the rest of society shows the breakdown of humanity. It becomes a fight for survival where the zombies might not be the worst things that are out here.

That's where I want to leave my recap as I feel that gets everything up to speed for what you need to know where this story is going to take us. As I was stating in the opening paragraph for this, I really wondered where they were going to go for this sequel. I'm actually glad that it decided to put us with another group in the same world as that worked for me. On top of that, I like that since there's time between the original and now, they allowed the world to develop like it does and it really hits on some aspects of social commentary.

Now as you all probably know, I'm from the United States, but this movie is really hitting on issues we see here. The first being that there's this conspiracy going around that COVID was developed in a lab and was released. I'm assuming this movie was made before all of that, but it is scary the parallel is drawing there, which this zombie virus was made in a lab. There is minority of conspiracy theory folks that also believe the Corona Virus was as well. Living in this pandemic is wild to see this movie as everyone has to quarantine from the infected to stay alive.

The next point I wanted to hit is the fact that Jung, his brother-in-law and the other two survivors are refugees living in Hong Kong. They're looked down on because of what happened in South Korea, but again, living in the US there is a lot of talk about immigration. I had to unfriend people on social media as they were saying some extremely racist things about those from South, Central America and especially the Middle East. These people are struggling being displaced and it is much worse when those around you are alienating you as well.

I don't really want to go to spoiler heavy for things that are happening back in South Korea for the characters, but this movie really hits a lot of points that you'd see in the original Dawn of the Dead. That's not to say they stole ideas as that is not the case. We are seeing the effects having power does to those that are stuck. Capt. Seo is pretty shady and he's working with Pvt. Kim (Gyo-hwan Koo). They have a sick game they're playing that reminded me of Land of the Dead, but better. This is used to placate the people and we’re seeing corruption. There's also Sgt. Hwang (Min-Jae Kim) who is on the verge of a military coup and he has the power to pull it off. Just seeing what has happened as they've been isolated here for so long and the madness that comes with not only their situation, but power.

Now if you've seen Train to Busan, something that movie did famously was tug at the heart strings of the audience. I won't spoil what happens there, but I was wondering if this movie was going to do that as well. It does a different take on it, this time with a mother and her children. I do appreciate that and I'm not going to lie, I was tearing up near the end again. I do think the impact is a little bit diminished, but I think it works with something we saw earlier in the movie for sure.

Since this is a zombie movie, I really should talk about the effects next. They really do seem to go practical where ever they can. It seems like they got actors who were dancers or something to this effect as they have really good control over their body. I wouldn’t be surprised if there was some use of wires as well. We do get the zombies being a bit superhuman at times, but not enough for me to gripe as I know this is something we see with martial arts films from Asia. There is also CGI, but to be honest, I think what they do with it is solid for the most part. I have some minor gripes, but I'm not going to nit-pick here. They also keep with the mythology of these zombies where they stop moving in the dark until they hear things. They also do run which goes along with how they move. The cinematography is well done also. There are some really good action sequences.

I want to shift this over to the acting of this movie. I think that Gang does really well as our lead. When we first get introduced to him, he's a soldier and he's upholding his duty. He has a tough decision to make, choosing family over saving the lives of everyone on this ship. This eats away at him and I love seeing the effects it has. You can feel it and it works for where his character ends up. Lee is also solid in her role. I like her as she forces Jung to grow. Re Lee is Jooni. There's an interesting dynamic for her as well as her younger sister, Yu-Jin (Ye-Won Lee), where they've grown up in situation, so they don't know much aside from it. I would say that Kim along with the rest of the soldiers in this unit is solid as well. Seeing the effects of their world on them and how power can corrupt works. The rest of the cast including those playing zombies did well also.

So now with that said, I didn't know what to expect coming in. I avoided the trailer and really learning anything about where they were going to take this. I would say that they did a really good job in keeping the feel of the first movie while giving us a new group of characters to follow. The acting really helps move this along with the effects of the movie. The social commentary we get really helped for me as well. Aside from that, the soundtrack fit for what was needed, but didn't necessarily stand out to me. I would rate this as a good movie. It falls short of the original, but that's a tough act to follow up. I will warn you, this is from South Korea. There is a bit of English in it, but it is mostly in Korean so there are subtitles. If that is a problem, avoid this. If not, I would say especially if you like running zombies, this is a good movie with its own mythology.