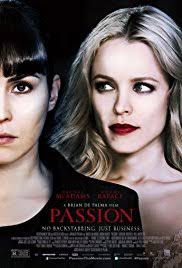 This was a film that I believe my sister turned me on to as she is a fan of Noomi Rapace. I was intrigued to check it out as I’m a big fan of Brian De Palma, who is the writer and director of the film. I also really like Rachel McAdams. Getting into this, the synopsis is the rivalry between the manipulative boss of an advertising agency and her talented protege escalates from stealing credit to public humiliation to murder.

I have to say that I wasn’t a huge fan of this film for most of it. I thought the concept was good, but it was just a little bit boring. The story is also solid; it just had issues with execution. For one thing, I didn’t realize that this film takes place in Europe. I’m still a little foggy on where it takes place to be honest. It does have that dreamy De Palma feel we get, so the not knowing what is real and what isn’t was really good.

Despite its issues though, the film does build a lot of tension. I also really liked the ending and the twist that happens in this film. It was one of those things that when this happened, it did hook me, so I have to give credit there.

To the issues I had with execution. I was confused at first when they were doing the dream sequence. I didn’t know if it was really happening or if this was a really dream. It wasn’t until after it ended that I realized what they were doing. I do like it, but I think there needed to be a little bit more indication of what is happening. I am still a little confused about the ending, but not enough for it to be ruined for me. As I have said as well, I am confused where this film takes place and what the actual outcome of McAdams was.

The acting was solid; Rapace is really good as well as McAdams. I think McAdams really plays a smarter and meaner version of her role in Mean Girls. Karoline Herfurth adds an interesting dimension and I think Paul Anderson was pretty good too.

With that said, this film is not really a horror film, but a thriller. Thrillers are very close to being horror and this one has a pretty solid mystery. It doesn’t occur to late, but it is interesting. I would recommend giving this one a viewing. Director/writer De Palma, who actually directed my favorite film of all time, does a lot of different things on screen and this one is no exception. This one has a good story, solid acting, but there was some issues with execution. Definitely not the worst out there and is still enjoyable. I felt this film was above average.