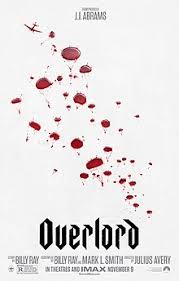 This was a film I was quite intrigued to check out. I heard reviews from podcasts that I listen to and it sparked even more interest. Being that it is a horror film set during World War II, in the actual war also was something that else that had me wanting to see this. The official synopsis for the film is a small group of American soldiers find horror behind enemy lines on the eve of D-Day.

We don’t waste any time on getting into this film. The film introduces us to the soldiers on the flight to the mission. They are airborne soldiers and they are heading into France ahead of the D-Day invasion. Their mission is to blow up a radio tower above a church. Ford (Wyatt Russell) is their demolition expert and will lead the mission. Boyce (Jovan Adepo) is a soldier who was drafted and is reluctant to fight. My favorite is Tibbet (John Magaro) who is a tough talking guy who gives Boyce grief.

Things don’t go as played though. As they fly over occupied France, they meet resistance from Nazi forces. Their plane takes a hit and they don’t get to jump as planned. They get separated and try to find their way to the mission. Ford and Boyce meet up. It is during their trek that Boyce starts to see the horrors of war that Ford encountered during his time in Italy. They do find others on their way to the village. This also brings them to Chloe (Mathilde Ollivier). She takes them to the village where they learn that the Nazi forces are up to something inside of the church. This also brings them to one of the commanders, Wafner (Pilou Asbæk).

I am trying to stay a little bit vague here in my recap of what happens in the film as to try to avoid spoiling anything. There is a good portion of this film though that is an action, adventure, war film like a Saving Private Ryan. I was expecting to see some of that, but I really wasn’t expecting as much of it as we got. I do have to say, that aspect of the film was actually good. It made it feel like they were really there. It is also interesting as it had my anxiety up as they are trying to navigate the town without being caught.

The other aspect to the film is the mystery of what they are doing inside the church as there is a secret lab there. Now this isn’t really spoiling it, as this is shown in the trailers. I think that it gets revealed at a good pace which I had me wanting to know more. There is an aspect of sci-fi here as well. Something else though that I really like is incorporating the Nazi and their search for occult things. I won’t give away what they are doing in the lab, but I definitely dug it. I was a big fan for sure.

Personally I was hoping for a more contained film than what we got though. The trailers made it seem that it would be, but I am not going to blame them for that. Really though, I kind of wanted it to be just inside the bunker/lab for more of it and really explore the experiments down there. There is something hinted at as to why they decided to set-up the base there. We do get some of this; I just personally wanted a little bit more.

I will say that the editing of the film was good. For a film that is close to 2 hours long, it doesn’t really feel like it. The tension builds throughout the film and for different reasons. Earlier on it is more about survival and trying to complete the mission. The more that you learn about what is going on here, you get more of the horror of trying to stop what is being done while trying to survive as well. I really liked this about the film. I thought the ending was pretty satisfying for what the film was going for as well.

The acting of the film definitely helps as well. Adepo I thought was really good as the lead. His character is interesting, because we learn a story about him and how he doesn’t really want to be there. He isn’t sure that he can kill anyone. As the film goes on though, he hardens and will do what it takes to survive. Russell was surprising as I knew the moment I saw him that he was Kurt Russell’s son. I thought he was excellent in the film. He has enough of that badass attitude in him for sure. Ollivier was good as well. I felt bad for what she deals with and the loss of those around her. Asbæk is such a great villain. He goes through an interesting transformation as well. The rest of the cast round out for what they needed, but I do need to shout out Magaro. I thought he was funny and he turned in a solid performance as well.

Effects for the film were really done as well. The battle aspects with gunshots, wounds and blood all looked good. It surprisingly didn’t make me cringe, which with how realistic it was, I was surprised it didn’t. The creatures we see in the film are also really good looking. They move in an interesting way and that was pretty creepy to see as well. The film was also shot very well. It does a great job to make it feel like we are really there.

Now with that said, I thought this was an interesting film. It combines something that is quite horrific like war and then adds other elements to it. On top of that, it has an aspect I am a really big fan of and that is the Nazis and their search for the occult. I would have liked to see more a contained horror film, but I don’t mind what they did in this one. The title of the film also has an interesting name as I it’s the name of the project that is going on. The acting and effects were really good. The film is edited very well to build tension throughout to a satisfying ending. As for the score, it didn’t really stand out to me or really hurt the film either. I do think there are some minor issues, but I thought this was a good film and worth a viewing for sure.