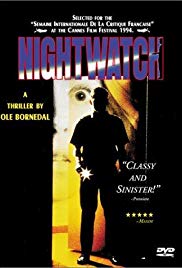 This was a film that I had a bit of trouble finding at first, but I do have to admit, I was glad that I took the time to find it. It is an interesting premise for sure, although I do have to argue that some of the comparisons on my DVD copy are a bit out there. The synopsis is a law student starts working as a night watchman at the Department of Forensic Medicine in Copenhagen. His mad friend gets him on a game of dare that escalates him to being targeted by a serial killer.

We start here around a table where we have two couples. Our main character is Martin (Nikolaj Coster-Waldau). His girlfriend is Kalinka (Sofie Gråbøl). His friend Jens (Kim Bodnia) is also there with his girlfriend, Lotte (Lotte Andersen). There’s a news report on television about a serial killer who is targeting prostitutes. It is brought up that Martin has issues as he is starting work at the building where his victims is being brought to.

His tour of the new gig is given by an elderly man who is the former night watchman and it’s his last night. During the tour, Martin is shown a couple of rooms that are unnerving to him, especially one that is a room full of bodies awaiting autopsy. He is told by the elderly man to get himself a radio where Martin tells him he is there to mostly study.

We then see Martin and Jens in class. Martin is quite charming and Jens asks if Kalinka is enough for him, where Martin informs him that he’d never cheat on her. The two of play a game of dare, where the stakes are raised to whoever loses has to give up their life, in Jens’ eyes, to marry their girlfriend. It really does seem that Jens isn’t ready for a life of settling down as of yet.

Things become quite complicated when Jens tells Martin he had sex with a prostitute, Joyce (Rikke Louise Andersson). She is quite young and his dare is for Martin to do the same thing. The problem is that Jens tells her his name is Martin and in order to keep up this charade, he has to tell her that his name is Jens. During an odd dinner scene where the real Jens is humiliating her, she reveals that she may have the serial killer as a john.

At work, Martin is freaked out by an alarm if one of the ‘bodies’ in the morgue isn’t really dead. This gets the night doctor to not like or trust him. Martin does befriend the Kommisæren (Ulf Pilgaard), who shows him a bit more than this student should probably see. Things take a dark turn though when Joyce reaches out to Kalinka. She gets into it with Martin; until he realizes what she told Kalinka is him, but actually telling her about the serial killer. The problem is the killer is framing Martin for his crimes.

Now I do have to say, this film does have a pretty interesting story. I think that Martin being a law student is intriguing, because he is given a taste of the career that he wants to get into. I’m not entirely sure if Kommisæren would really involve him like he does, but then again, this could actually be something that in Denmark they might, where the film is from. It feels like a giallo movie in that, where they would involve people in solving a case that might not in real life.

Something that I could definitely connect with her is Jens. He has a girlfriend who cares about him and they’re to that point in their relationship where they have to figure out what they’re doing. He is starting to panic something he is sabotaging himself, through this dare game. He’s even pulling Martin into it as well. It becomes quite intriguing way to tangle with the killer as well.

I did have a slight issue though with how the film plays out. We only get to see one murder in the movie and we see the aftermath of another one. I personally felt this might have been better served if we did get to see more of them, but I can’t fault how it decides to play out. With the mystery, it actually is more of a police procedural or a giallo without seeing the killer really work. They are gloved in a scene though and I was left guessing until the end, which I did like.

This does hurt the pacing a bit for me though. Because we don’t get to see most the killings we hear about, we just really get the character development. I don’t dislike the film, because of this, but I do think that it does bog down the pacing a bit. Learning more about Martin, Jens, Kalinka and then ultimately who the killer is I feel is good, but it really becomes a slow-burn without enough buildup overall. I did like how it ends and it does get exciting there. Seeing Martin descending into madness and then becoming the prime suspect was good and it did make me pause, but there is a great long play of the story overall.

The acting in this film really does carry this. I, of course, know Coster-Waldau from Game of Thrones. I did like seeing a young version of him here, because you can definitely see his talents. He was really interesting in his role, especially when he is drug along by Jens. This ends up getting him in trouble and I liked his descent into madness and losing himself. Gråbøl is also good in a supporting role to him and how she develops the story. Bodnia I really liked as well. His destructive personality helps drive the story as well and makes things quite interesting. Andersen was solid in support as well, especially to offset Jens. Pilgaard, Andersson and the rest of the cast also round the film for what was needed as well.

This is another film that I would have liked to see more from the effects, as what we get is really good. There is a death scene and the climatic sequences are both great. Joyce’s friend who was murdered, the body there looked good. Again, I would have just liked more, but I really can’t hold it against the film too much as it isn’t that type of film. It is also shot very well. There are some interesting angles that are used when Martin is doing his rounds.

Now with that said, this film was another one I hadn’t heard much about, but was quite impressed with what I say. The film has an interesting, complex story with some good subplots. I do think that the pacing is hurt mostly by a lack of what we don’t see, but I think that it does find its tension to a satisfying conclusion. Acting really helps to drive this film and the effects are good, I just wanted more there. The soundtrack of the film really didn’t stand out to me, aside from a pretty funny scene with Martin trying to stay awake. It did fit for what was needed though. Now with that said, I would say that this film is pretty good, but just lacking a few things to really set it apart. I will warn you that this film is from Denmark. I watched it in its native language with subtitles on.