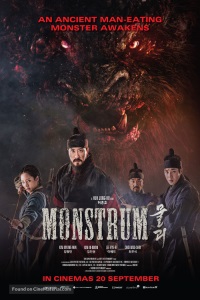 This was another of those movies that hit Shudder as what felt like in a group. I really like foreign films, especially ones from South Korea. I’m also a fan of fantasy and historical type films as well, especially when you’re incorporating swords, monsters and things to this effect. It also seemed like a solid choice as a pairing on Journey with a Cinephile: A Horror Movie Podcast. The synopsis here is Yoon Gyeom (Myung-Min Kim) is a loyal subject of King Jung Jong (Hee-soon Park) of Joseon. He struggles to fight against a monster that threatens his king’s life and a group of people trying to depose him.

We start this off that there are historical documents that some of this is true from 1506. The country is in turmoil and I feel like they unseated the king or at least are trying, which has made it even worse. It then shows us they’re herding villagers to a cliff by a ravine. It is stated they have plague and that they need to be kept away to avoid it from spreading. They are then massacred. We see a little girl as her mother is killed and watches on as these government soldiers wipe them out.

It then shifts us into the present of the movie. There are talks of a monster that is feeding on people and living on Mt. Inwangsen. It is being called a monstrum. King Jungjong doesn’t believe it so he wants an investigation. This causes him to send a government officer of Heo (Woo-ski Choi) to find Yoon. He’s now a hunter and living off the land along with Sung Han (In-kwon Kim), who is his brother, and his daughter of Myung (Hyeri Lee). What we will learn is that Yoon was told to kill her as she was the little girl from the opening sequence. He left his post as a guard to King Jungjong along with his brother. It takes some convincing, but he agrees to help.

The trio along with Heo set off with soldiers and a military unit that are trained to hunt tigers to discover if this monstrum exists. They find evidence of people being killed, but it is pointing to something else. The more they look into it, the more it really seems there could be another explanation. There are also cases of the plague from the beginning springing up again. It all comes down to, is the Monstrum real? Or is this another ploy to destabilize the government and kill the king?

Now that’s where I’m going to leave my recap of the movie as that gets you really up to speed as to the crux of it. Where I want to start with my analysis is the fact that this movie got released in America on Shudder during a pandemic. Seeing that this movie was made in 2018, well before it, but the release is definitely capitalizing on the state of the world. I’m not saying that is a bad thing. It is strategic for sure.

That is something that I want to delve into a bit more. To start with would be the time period it is set. It was much easier to do things like this, but let’s be honest, as an American citizen I’ve heard of my government doing things like this in other countries most of my life. The Prime Minister here, who I believe is the character of Sim Woon (Kyeong-yeong Lee). He wants the king out so he is doing things like creating panic and spreading rumors to help facilitate this. What is also interesting here is that one of these tales is the plague. We’re seeing a lot of people in the United States who are clinging to this as a ‘democratic hoax’ to destabilize our current president. Personally I think that is ludicrous, but that is what some believe. It is interesting to do a movie sent this far into the past with similar premises relevant today.

I will give that this plague in the movie is much worse though since it actually gives physical signs you can see like boils and welts. There are some who are being killed when they don’t have it to sow the seeds of anger and to blame the current king. There is then the rumor of the Monstrum. I’ll be a brief spoiler here is that there is something here in the movie and it is correlated with plague that is spreading. I would have been fine even if it turned out to not be there. It is interesting though as earlier this year I rewatched Brotherhood of the Wolf and there are some definite correlations to this movie with the stories as well as who is behind it.

What I haven’t had the chance to do would be to fact check this movie to see if there was something like this happening in South Korea during this era. Either way it doesn’t hurt my viewing of this, but it would be interesting to learn that this is really being based in fact as the beginning of this is indicating. I wouldn’t be surprised if there was though.

I now want to shift this over to something that also worked for me which would be the acting. Myung-Min Kim is really good as our hero here. He was the best warrior the kingdom had and was willing to give it up to protect this child. He’s reluctant to return and fight, but he feels an obligation to Myung, King Jungjong and finding the truth for the people of the nation. In-kwon Kim is good to add some levity. He has some good fight scenes as well. Lee is quite attractive and I like that a woman like her playing a secondary, but still prominent role. Knowing a bit about the cultures from Asian countries, you wouldn’t expect to see this. Even more so for the era it is set. I like Choi as a guy she’s interested in and he adds some good action performances as well. The rest of the cast does round this out for was needed as well, with some good villains in the government.

Since I’ve moved into it a bit, I’ll go into the effects here. I think the choreography of the fight scenes look good. If there are any issues, we do get some times where they go to CGI that doesn’t necessarily work for me. Not enough to ruin them though. Aside from that, there is the issue of the monster. I like what they’re doing with it, but they go CGI and some of it just doesn’t work. It would have been really tough to make it practically; especially what they want it to do, but that is where I’m at with it. I don’t completely hate it, but it does take me out of the movie.

Something else that doesn’t necessarily work for me would be that this runs too long. I went through the story pretty efficiently where this movie I think drags some things out too much. It clocks in at 105 minutes where I think that there at least 15 minutes that could have been trimmed and that would have tightened up the movie. That’s not to say that I disliked this. I did find myself bored a few times though.

Now with that said, I still think this is an interesting movie that is playing some ideas that are relevant even now. Seeing this during a pandemic is interesting and having issues with the government with that as well. I do like that there could or couldn’t be a monster here, but what we get there doesn’t look great. The fight scenes we get though are on the whole solid with some issues with CGI. The acting though was good and the soundtrack fit for what was needed. It does run a bit long and I lost interest for some stretches if I’m going to be honest. I would still say this is an above average movie overall. Be warned, this is from South Korea, so I watched it with subtitles on. If that is an issue, I would avoid this, but if not, it is worth your time if what I’ve relayed sounds interesting.