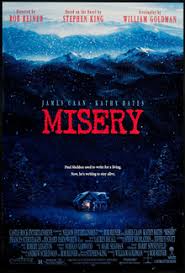 This was a film that I used to catch in parts on the movie channels growing up all of the time. I don’t think it was until my sister actually bought the film on DVD that I saw it all the way through. I might have actually read the novel by Stephen King before actually seeing it start to finish as well. The synopsis is after a famous author is rescued from a car crash by a fan of his novels, he comes to realize that the care he is receiving is only the beginning of a nightmare of captivity and abuse.

We start this film in a cabin where writer Paul Sheldon (James Caan) is finishing up his latest novel. He has been made famous by his series of romance novels following a woman named Misery. They take place in simpler times, but he has decided to change it up. He goes through his ritual as he finishes the new novel with a cigarette, lit by a wooden match and a bottle of Dom Perignon. He then calls his agent, Marcia Sindell (Lauren Bacall) to tell her he has finished. He gets into his car and then leaves. The problem is a blizzard hits and he crashes. We do see someone helping him out of his car.

Paul then comes to in the house of Annie Wilkes (Kathy Bates). She informs him that she saved him and it was a good thing, because she is his biggest fan. Paul has two broken legs and separated shoulder. It is a good thing she found him as she is a nurse. She tells him that the roads are closed due to the blizzard and her phone line is down. Once they are cleared and fixed, she will alert the hospital about him. She has administered the best care she can to help him get on the path to recovery.

Some time goes on and Marcia calls the local sheriff, Buster (Richard Farnsworth), being worried that her client hasn’t been heard from. Buster puts her at ease and starts to look into it. His wife and deputy Virginia (Frances Sternhagen) helps as well. They don’t find any trace of him, but Buster feels something isn’t right.

Annie asks if she can read the new novel that Paul wrote. He agrees, but things take a turn when she doesn’t like it, as she considers it filth. She is even more devastated when she reads his newest novel about Misery and she has been killed off. We see that isn’t mentally stable and hurts the man she is supposed to be caring for. She comes up with the idea that he is going to write Misery Returns and fix what he did, against his will. She also tells him that no one knows he’s there or that he’s even still alive. Paul has to find a way out of this nightmare before it is too late.

It is pretty easy to see how this film was nominated for quite a few awards. The concept of this is actually pretty great. We have a writer, who is typecast by the works that he has been making. It has made a good life for him, but he isn’t considered to be a good writer. What he is producing is just commercially successful. As an inspiring writer, I can see both sides of this coin here. I’d love to be a writer full time and knowing that my books would sell, but at what cost? If I am writing things that I don’t like, would it be that much different from going to a job every day that I don’t enjoy? It is an interesting concept here. Also the physical abuse he endures is pretty cringe worthy as well. The title has a duality to it as well, being that he’s in Misery with the punishment he’s enduring both mentally and physically as well as being the character he wrote about.

Going from there, we have the psychopathic Annie. She is doing a good thing by helping Paul. The problem though is she is holding him hostage. She then is forcing him to write something that he doesn’t want to against his will. On top of that, she burns the manuscript of something that he is really passionate about. She did say something that I completely agree with though. She complained about the serial shorts that would play before films back in the day. She hated when it would end on a cliffhanger and then the next one would retcon so they could continue it on. This is a big gripe I have with films when they make a sequel and change things so they fit, because a sequel was not in the original plan.

The final aspect of the story I really want to cover is Buster and his investigation. I like that he doesn’t jump in thinking that he’s been taken. It is a gradual thing that feels completely natural. He finds evidence slowly and builds up to figuring out what is going on here. Now this isn’t a spoiler, as you know that things have to come to a head. I even like that he starts to read the Misery series to see if he can find something there and when he does, I was all on-board for that.

Next to move to the pacing of the film where I think they did a great job. It doesn’t take long to get us into the story of Paul coming into the care of Annie. At first we just think that she is a bit socially awkward. I like that they don’t show us she is full blown crazy too early, but we do get glimpses. There are some interesting reveals through things she says and does all the way to the point where we see just how insane she is. There is a great scene of Paul as he gets out of the room spliced with us seeing Annie in town. It is tense as we hope he can get what he’s looking for and back into his room before it’s too late. I also think the investigation by Buster builds at a solid pace to the climax where everything comes to a head. I like the ending and seeing the effects of this nightmare has on everyone.

The acting for this film is quite amazing to be honest. Caan I think does a really good job at being helpless early on. I do like that he plays on Annie’s emotions to keep things calm, but he’s always looking for a way out. Seeing the disappointment and pain on his face are also really good as well. Bates was absolutely amazing. I can see why she won an Oscar for this performance. She seems unstable from the beginning, but the reveals of how crazy she is quite unnerving. Farnsworth and Sternhagen are great. I love their banter back and forth. Their roles definitely help build the tension. I also thought it was great to see a cameo by screen legend Bacall. The rest of the cast definitely rounded out this film for what was needed as well.

To the effects of the film, they really didn’t use a whole lot of them. This movie is really more based in reality and mostly psychological. The being held captive is where a lot of the fear comes from. The punishment to Paul though definitely made me cringe. It was done practically and looked so real. I also think the blood we get looks good. The wounds inflicted as well. I also think the make-up on Paul to make his car accident injuries look real which was a solid move. The film is also shot beautifully as well.

Now with that said, this film is a classic. I think we had a great story here from the mind of King, but director Rob Reiner and writer William Goldman definitely bring it to life. It is terrifying concept to be kept alive like Paul is by this psychopath and forcing him to do something against his will. I think the pacing is great in ramping up the tension and the horror of the situation. Even the investigation by Buster helps in that as well. The acting is absolutely amazing and the effects they use are realistic. The soundtrack of the film doesn’t necessarily stand out to me, but it fits the scene for what they needed. This film is great and would recommend it for horror and non-horror fans alike.