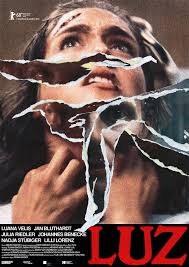 This was a film that I remember hearing about when it was making its festival rounds. I was pretty excited, because I heard a lot of good things about it. My local theater had been showing trailers for a year now it feels like. I finally got the chance to see it there as well. The synopsis is Luz (Luana Velis), a young cabdriver, drags herself into the brightly lit entrance of a run-down police station. A demonic entity follows her; determine to finally be close to the woman it loves.

As the synopsis states, Luz enters into a police station. She is walking a bit funny and she goes to a vending machine. She purchases a drink and then starts to yell at the person working the front desk.

We shift to a bar where Dr. Rossini (Jan Bluthardt) is having a drink alone. A woman, Nora Vanderkurt (Julia Riedler), calls out to him and they have a drink together. She starts to tell him a story about Luz, as the two of them went to school together. It is a dark tale of how Luz thought a classmate was pregnant and tried to see if she was a medium. It involves a preserve version of the Lord’s Prayer. The two of them go into the bathroom together.

Luz is taken to a room with Olarte (Johannes Benecke) and Bertillon (Nadja Stübiger). Dr. Rossini is called in as well. He hypnotizes Luz and they try to figure out what happened to her that night. It leads on quite the dark turn of events as they also explore the event that happened all those years ago.

Now I wanted to be a little bit vague in my recap here, as the film really only runs 70 minutes. I will say though, they take full advantage of that time for sure. From the moment that Luz walks into the police station, I could feel my anxiety going up. I will get into that in a little bit though.

What I really like about this film though is how it is put together. We have Luz who we don’t know if mentally she is all there. From her reciting of her version of the Lord’s Prayer, yelling at the front desk worker and the event that she was a part in, she definitely sounds trouble. On top of that, Nora states she jumped out of her taxi while it was moving. We see the effects of this all over Luz’s face.

The events of the hypnosis are great. Dr. Rossini puts her under in a matter of seconds and what I love about this sequence; we actually get to hear the noises that would be happening to recap the night. We see Luz pretending to pick up Nora, but it is done in the way where we get to see a version of the events. Nora sits behind her and we see Luz moving her lips as she is retelling the conversation. I was captivated with the film’s way to retelling this.

From here I’ll go to the pacing and editing of the film. If you couldn’t already tell, I think the pacing is amazing. It is quite a tense film and it moves along at a great clip. If anything, I would have been fine with adding a bit more to just explain things a little bit deeper. I also like how they set up everything, showing events in the police station up against the bar. We also get this later in the film when they are showing how things were mirrored back then. I thought the ending was solid for what the film is conveying.

The acting of the film is good as well. I thought Carrara’s performance is interesting. She is a young woman who has to pretend that she is doing things like drive a car and act like she is picking up a fare in her taxi. I wouldn’t be surprised to see that she had stage acting in her past. That actually goes for the rest of the cast as well. Benecke was good in his smaller role. He did some things that I found to be a bit comical in a realistic way. Bulthardt is really good in his performance. I like the turn that comes over his character in the grand scheme of the film. Riedler and Stübiger were also solid along with Lilli Lorenz who appears as Margarita.

As for effects in the film, there actually really isn’t any that I could think of. They were done practically and it is mostly blood on characters. Dr. Rossini does do something to himself that made me cringe a bit. The only other effects come back into play with editing the scenes with what happened in the past. It was also framed in a way that was good. The cinematography of the film I enjoyed. They really did use the depth of the shot to their advantage as well as a mirror at one point.

The last thing I have to cover the soundtrack. I thought it was used amazing. It goes a bit loud and being in the theater, it worked very well. The songs selected actually made my anxiety go up, even if nothing is really happening on screen. The sound effects are another thing that is really good here. When they are pretending to be in the car and other things, we actually can hear the car starting or the radio playing. It gets us in the mindset of what she was really doing and I loved it.

Now with that said, I’m so glad that I finally got to see this film. It has an interesting story, that doesn’t have a lot of moving parts, but it definitely takes up the whole running time with no filler. It isn’t a long film and I could have asked for more there. The acting really helps to drive this film. No one really blew me away, but I wouldn’t be surprised if they all had theater backgrounds as that is how it kind of feels. There’s not a lot in the way of effects, but what we got were good. The soundtrack is used masterfully and one of my favorite aspects, between the use of sound effects and music alike. I will warn you, this is from Germany and the dialogue is pretty much solely in German or Spanish, so I had to watch it with subtitles. If that is not an issue, definitely give this a viewing. I think that is a really good film with a gritty feel.