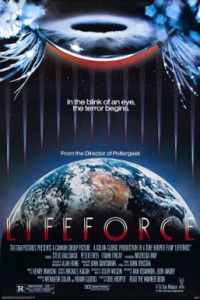 This is one of the films from Tobe Hooper that I had never seen. I feel like I knew about it from seeing the title pop up on the movie channels growing up. I don’t think I realized it was a Hooper film though. It is one that I did put on here and there, but never caught it in the beginning and wouldn’t watch more than a few minutes. I am now watching this as part of Movie Club Challenge over on the Podcast Under the Stairs. The synopsis here is a race of space vampires arrive in London and infects the populace, beginning an apocalyptic descent into chaos.

For this movie, we start with a joint space mission with the United States and United Kingdom. The space ship they’re on goes by the name of Churchill and their mission is to research Halley’s Comet up-close. They’re led by Col. Tom Carlsen (Steve Railsback). As they get close, they discover there is a ship that is near the head of the comet. They decide to explore further.

What they discover is that this ship is pitted and looks derelict. A group goes inside to explore. They discover passengers that look to be bat-like and are dead. They also crumble to the touch. The ship then comes to life and an inner door opens. Inside they find three preserved bodies within cases. They’re taken back to the ship along with one of the bat corpses.

The movie then shifts 30 days later. There is no answer from the Churchill so a rescue ship is sent up. They find that inside, the ship has been burned and the tapes of data have been erased. The only thing still intact is the cases with the three bodies. They’re taken back to Earth to study.

Research is done into the space girl’s body. She is portrayed by Mathilda May. Leading this are Dr. Hans Fallada (Frank Finlay) and Dr. Bukovsky (Michael Gothard). They make a fantastic discovery when she wakes up. She sucks the life-force out of a soldier before escaping the facility. Col. Colin Caine (Peter Firth) is called in to take control of the situation along with Sir. Percy Heseltine (Aubrey Morris), a minister with the government.

Another body is found in a park and later that day, they make another horrible discovery. Two hours after the body is attacked, they wake up, looking to take the life-force of another to survive. Caine is trying to find a way along with Dr. Fallada to get this situation under control. They do get some help when the escape pod from the Churchill is found with Carlsen still alive. It becomes a race against the clock to find this space girl before it is too late. The two space men also wake up and these space vampires’ powers are far stronger than we imagine.

That is where I want to leave my recap for this movie. What I first noticed about this movie is that it is based off a novel from Colin Wilson. I’m actually intrigued to read this. Going from there, I like the idea of this ship using Halley’s Comet as a shield. Now I remember learning about this comet. It hasn’t passed over since I’ve been alive, but I like the idea of this. It is interesting is that it reminds me of the Heaven’s Gate religion that believed there was a spaceship like this with Hale-Bopp Comet. There are also shades of Maximum Overdrive as well. Space and different things out in it aren’t fully understood so I can see where fantastic stories like this come from.

Now from what I saw, this novel is called Space Vampires and that is where I’m going to go next is this idea. Instead of drinking blood, these creatures suck the life-force from us. We see that from the opening moment where the space girl attacks the guard. What makes this even better though is the exploration this movie does into vampire mythos. Dr. Fallada brings up that he believes these creatures have come to Earth before and that is where lore of vampires started. Blood is considered the life force of humans so it could be lost in translation. Dr. Fallada comes up with a way to defeat them from lore and I think it is Caine that brings up why the ship from the comet is getting closer to Earth. I really like the idea of their ship and how it correlates to what these monsters do. I’m a sucker for mythology and I like that the movie explores this.

What I do think hurts this movie though is that is doesn’t necessarily translate to the screen as well as I think they wanted it to. I’m pulled in by the story, but I do find the movie to be a bit boring. I think that part of it could be the longer runtime. I’m pretty sure I watched the longer cut of the movie, which could explain it. There just felt like some things that don’t add much could have been trimmed. I also feel that some parts just went a bit too far that couldn’t necessarily be reigned in. Not to say that I disliked it, but I did lose interest a couple of times and was checking the clock.

To get back to some positives, I did like the acting. Railsback is solid as Carlsen for me. I like that he’s the expert due to being close to these creatures first. There is an explanation how he knows more than he probably should and that worked for me. I also like that he’s torn on what to do because of influence from the space girl. Firth works for me as Caine. He is more of the rock that we need here to keep Carlsen grounded. I like Finlay being an expert as well to help fill in background from scientific means. I’ll give credit to May. She is nude quite a bit in this movie. That seems like it would be uncomfortable, but she was a trooper. I think she does well at lacking emotion as this creature and being menacing. I liked seeing Patrick Stewart here as Dr. Armstrong. Aside from that, the rest of the cast rounded this out for what was needed.

The other thing I really liked was the effects. I was leery as the stuff in space in the beginning wasn’t great. It looked like green screen to me and didn’t necessarily hold up that well. Once the movie comes back to Earth, we get some really good stuff. The people that are drained looked great. The sounds they’re making are creepy. I didn’t mind the life-force being pulled from people and what not. The cinematography also looked good I’m pretty positive here on the whole for this part of the movie.

So then in conclusion here, this is a movie that I hear some people really like and some not so much. I thought the concept and the story is interesting. The acting help bring the characters to life, especially the dilemma that Carlsen is going through. There were some slight issues I had with effects early, but that goes away once we get back on Earth. I do think that the movie is a bit too ambitious and runs a bit long. It could be trimmed just a bit to tighten it up for me. The only other thing would be the soundtrack which fit, but also didn’t stand out. I’d say this is an above average movie. There are some issues I have, but did enjoy what they’re doing here.