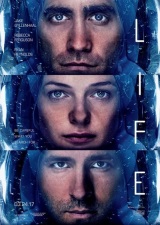 This film takes place on the international space station. A probe has been sent down to Mars and it is on its way back. They have one shot at catching it and studying the samples that are on board. Ryan Reynolds is the one that is going out in a spacesuit and using a remote arm to try to catch it. The faith isn’t very high, but he succeeds in doing so.

The rest of the crew is as follows: Hiroyuki Sanada is an engineer and knows how the station works inside and out. Rebecca Ferguson is there creating the contingency plans to ensure that they do not have contamination and can return to Earth safe. Jake Gyllenhaal is the chief medical officer. Olga Dihovichnaya is the crew leader. There is also a biologist played by Ariyon Bakare.

There are soil samples on the probe and they are broken up into different sections. Bakare ends up finding a complex one cell organism in one of them. This is very similar to things we find on Earth and is also the first time that alien life has been discovered. It doesn’t move around, but Bakare starts to play with the atmosphere of the container they are studying it in. They simulate what prehistoric Earth was like and the organism moves.

It starts to grow from this point and gets larger. It divides to become even more complex. Bakare is studying it inside the container and using rubber gloves that are attached to it. The cell becomes almost a sampling and follows Bakare’s finger as he moves.

This information is broadcast to the world and it is decided that its name will be that of a school where students won a competition. Its name will be Calvin.

Bakare becomes careless and there is a problem in the lab. He didn’t secure a valve and the air pressure as well as temperature changed in the container holding Calvin. Reynolds scolds him and tries to make sure that he gets his head back into what he is doing. Calvin has been back into hibernation and won’t move. It is also quite a bit larger now.

Reynolds is concerned that the creature has died, but Bakare assures him that is not the case. He asks Ferguson if she thinks it is a good idea to shock Calvin to see if that creates a response. She tells him that she is not sure and has no idea if it will have an effect. He does try it and Calvin wakes back up. It breaks the wand and then latches on to his hand. Calvin breaks all the bones in it and this knocks Bakare out. Calvin then uses the wand to free itself by stabbing the rubber glove.

Reynolds sees a chance and breaks containment to pull Bakare out. The problem is that Calvin latches on to his leg and Ferguson is forced to lock him in. Reynolds uses a type of flare to burn Calvin and get it off. He then uses an incinerator in the room as a flamethrower. He runs out of fuel before he can kill it. The creature then goes inside of his body, killing him.

The incinerator then sets off the fire system to put it out. Sanada and Dihovichnaya do what they can to prevent it from escaping, but it gets out one of the cooling systems. Their communications are then knocked out during a distress beacon. Dihovichnaya decides to go out and fix it, but she is attacked by Calvin as she does. He breaks the coolant system on her spacesuit as she tries to make it back inside.

I have to say that I came in hearing this film was good and was pretty excited from the previews. This film didn’t disappointment. I wasn’t sure how they were going to play out with his alien, but I like what they did. The setting is terrifying to me, as being isolated in space is something that is very scary. I thought the acting in this film was solid as well. I really want to give Reynolds a shout-out, because for being a comedic actor, he has really shown that he can fit well into more serious things. It is a bonus that he can alleviate tension of a scene without ruining it. I thought the film visually looked great and it made you believe they were really in space. The music helped to set the mood and build tension as well. I finally want to say that I thought the creature looked great and the larger it grows, the scarier it becomes. The intelligence that it displays is also something that makes it even scarier, it learns and adapts.

I did not have a lot of issues with this film, but there were a couple of things that struck me. The first is that I feel the creature’s growth doesn’t necessarily make sense. I can see when it is drinking fluids, like water or blood, that making it grow. There are times though that it doesn’t seem to be taking in anything, but is still growing larger. I know the people don’t know why so that explains why we don’t. I also don’t think it is a bad move by the filmmakers to not say why, but something I was a little bothered by. The other is that I would have liked to know a little bit more about the back-story to the characters, especially Gyllenhaal. He seems to be such a sad character and I would have liked to know a little bit more why so I could connect more with them. Neither of these things ruins the film, but some things that I had some issue with.

Now with that said, I would recommend seeing this film. The acting is good, the story and concept are great. The setting is terrifying, being in space with no where to go. The creature looks great and is terrifying. Now I personally would have liked more back-story for the characters as well as knowing more about the alien, but I won’t fault the filmmakers for either. I was also a big fan of the ending as it was something I wasn’t sure they would go for. I definitely would say to view this film at least once.