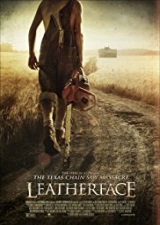 This film starts at a birthday party. The mother is played by Lili Taylor. The birthday boy is Boris Kabakchiev. He has two brothers that are also there, played by Dimo Alexiev and Hristo Milev. The grandfather is also there, played by Eduard Parsehyan. There is a man that is accused of stealing the family’s pigs there as well. The gift given to Kabakchiev is a chainsaw; they want him to use it to punish the thief. He does cut into his leg, but stops. It then falls on to Parsehyan to finish the job.

The year is 1955. We shift to a couple in a truck. They are played by Lorina Kamburova and Julian Kostov. They almost hit something in the road that looks like a pig. When Kamburova gets out, it turns out to be a boy pretending. She chases after him to see if he is okay. This leads her to a barn where Alexiev and Milev are waiting her. She ends up falling through the floor, into a bear trap and is then killed by Alexiev. The police then show up at the scene and it turns out that Kamburova was the sheriff’s daughter; he is played by Stephen Dorff.  He wants to kill the Alexiev, but he is stopped by a deputy, played by Finn Jones. Taylor then shows up, demanding they are released. Dorff gets some revenge by taking away all of the minor children, to put them in a mental hospital.

We then jump ten years into the future. The doctor that runs this hospital is played by Christopher Adamson. We see a nurse on her first day, played by Vanessa Grasse. She is being shown around and goes into a common room where many of the patients are. She sits down and tries to talk with Sam Coleman. He is a large man and doesn’t talk much. Another patient, played by Sam Strike, informs her of this and joins them. A fight across the room breaks out and Grasse goes to intervene. A patient attack her, but Coleman comes to the rescue.

She wants to help these people, but Adamson doesn’t think any will ever get out. That night Taylor shows up with a lawyer and an injunction to see her son. Adamson speaks of a loophole and how she will need another. Taylor doesn’t like this and sneaks away to find her son. Adamson is preparing to do shock treatment on Coleman and another patient, James Bloor. Taylor ends up causing the inmates to escape. Coleman breaks from the chair, takes out the nurses and frees Bloor.

During the escape, Bloor meets up with this girlfriend, played by Jessica Madsen. They are both crazy, having sex in the stairwell while inmates run past. Strike saves Grasse from a crazed person trying to attack her. Coleman goes after Adamson to get his revenge. Bloor and Madsen find a car and knock out Strike and Grasse as they flee. Both are put into the trunk. Coleman is picked up as he is walking down the road.

They stop out a house and change their clothes. That’s when the rules are laid down. They do not try to flee, if they do, they all will die. Bloor and Madsen lead them on a crime filled trek through Texas as they try to elude the police. One of them will become Leatherface one day, but who was the boy that was taken from Taylor all those years ago?

For this film, I was a big fan of the first two in the series growing up. I even thought the remake and the prequel to the remake were both good as well, as I saw both of those in theaters. An issue with this series is that it wasn’t planned on being one like it has been, so the timeline is screwed up. One thing I like about this film is that is actually tries to line things up to the other Texas Chainsaw Massacre. One thing I like is that we have the older brother Drayton, who is the first two films. They even bring back Nubbins, who we know as the hitchhiker in the original. A problem here though is that Crop-top, from TCM 2, is never mentioned. I feel this could be just ignoring any sequels or films like that, but they are out there so they need to consider them in my opinion. This film does explain how Leatherface becomes who he is, which was good. They really push a red herring on you, but I could clearly tell there was going to be twist on it. I thought the ending was okay. The film being a prequel does limit what it can and cannot do.

I thought the acting was decent. Dorff is usually pretty solid to me, but I felt he was just okay. I wasn’t overly impressed by him in this one. Taylor was the same way. Strike did show some range and we see him pained by things that happen around him. His change at the end was interesting. Grasse was very nice to look at and I thought she showed some good fear. The rest of the cast did fine to round out what they needed in the film.

Next I will talk about the effects. Quite a bit did surprisingly look like practical, which I am a big fan of. Some was also clearly CGI, but to be honest, I didn’t have a problem with any of it in this film. There was some pretty good gore and I thought it worked well. The editing of the film was fine to me as well. It moves the story along, building tension to the reveal at the end. I had no issues there. The soundtrack didn’t really stand out to me in this film. It doesn’t hurt or help the film for me.

Now with that said, this film was fine. It could have been better, but being a prequel, it is limited to what it can and cannot do. I liked that it kept some of the continuity, but with the time of this series, it is already really screwed up. I like seeing the back-story of how Leatherface became the man that we know today. I wasn’t impressed by the acting, but it wasn’t horrible. The effects looked good; the editing built the necessary tension to the reveal. The soundtrack didn’t stand out or hurt the film in my opinion. I would say that this film is above average. It can be watched alone or part of the series. I think it should be viewed with the series, due to the nods to previous films, especially the original TCM.