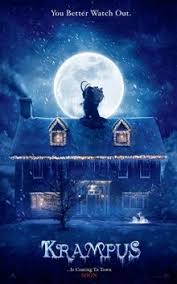 This was a film that I heard a lot about, but missed in the theater when it was making its run. Many of the podcasts I listen to always talked about how this is now in their Christmas horror film rotation. I decided to give it a try and get into the spirit myself. I’ve now given it a second viewing as it was on the Podcast Under the Stairs’ Summer Series, but I held off until December to watch it with Jaime. She loves Christmas and need movies like this to get into the spirit. The official synopsis for this film is a boy who has a bad Christmas ends up accidentally summoning a festive demon to his family home.

We kick this film off what looks to be people doing last minute Christmas shopping. Regardless, it shows one of things that I hate most about this holiday with commercial how commercial it has become. The camera takes us to different things there until we see what looks to be a play or a pageant and a fight happening there.

The film then shifts to a family returning home. Our main character is Max (Emjay Anthony). He is actually being scolded by his parents, Tom (Adam Scott) and Sarah (Toni Collette). He got in a fight during a Christmas play, which is what we saw. It turns out that Max still believes in Santa Claus despite his age. His grandmother, known as Omi (Krista Stadler), tries to cheer him up and tells him to write to Santa.

This family is being joined by their cousins, aunts and uncle. Max has a sister, Beth (Stefania LaVie Owen). His uncle is Howard (David Koechner). Howard’s wife is Linda (Allison Tolman). They have four children, Howie, Jr. (Maverick Flack), Jordan (Queenie Samuel) and Stevie (Lolo Owen) as well as a baby. The interesting thing about the last two is they are girls, but the father really wanted boys. Their Aunt Dorothy (Conchata Ferrell) is also joining them. No one is thrilled about her as she complains about everything and drinks a lot. This upsets her niece of Sarah.

During dinner, the two girls get the letter that Max wrote and read it aloud. He is embarrassed and wishes that Christmas would go back to the way it used to be. He then throws the ripped up letter out of the window. We then see that it goes into the sky.

The following morning, there is a horrible snowstorm and they can’t see even across the street. The power and heat are off as well. Max notices a snowman outside that wasn’t there before. Beth asks to go see her boyfriend, but when she doesn’t return home, Tom and Howard go looking for her. They find something sinister that is stalking them as everyone on the street seems to be missing.

I do want to lead off stating that this film is fun. If you haven’t gathered, I’m not the biggest fan of Christmas, but something about this film works for me. The concept of Krampus is something I find to be absolutely fascinating. Many of us grew up with Santa Claus and we had to be good in order to get presents. It is terrifying that if you are bad, there is an evil version that will come to take you away.

What I find interesting about this film is that Krampus uses evil toys and elves as his minions. This gave me vibes of A Nightmare Before Christmas even though their toys unintentionally do bad things, because that is just how things were done in Halloweentown. The minions in this film are quite creative I have to say.

Something that turned me off to this film before seeing it was there being a lot of comedic actors. At the time this film came out, I wasn’t the biggest fan of horror comedies. It is something that I have started to come around to, even though the crossover still isn’t my favorite. I have to say, I was wrong, because the cast definitely enhances this film, not ruin it. They bring something to timing that works for sure.

The pacing of the film is very well done. What I like about this film is that it does have lighter feel throughout, but it does get dark. There are some laughs that are sprinkled in, which is something I like if you are going to have comedy. This film does feel like a horror film for sure. There was a moment in it where I was going to get real angry if they decided to end a certain way. It ended up going the way I hoped it would, which is actually something I had heard on a podcast prior to watching this. It is funny to have the same reaction to this.

Acting for this film I thought was great. Anthony is interesting as he is the main character, but he falls into the background for a good portion. A lot of that is he is a kid and the parents are trying to do what they can to protect them. Scott and Koechner are interesting as they are the exact opposite of each other. You have Scott who is more left in his ideology with Koechner being right wing. They end up coming to common ground to work together which I thought was good. Protecting their families is that thread. Collette is solid as usual. I liked Stadler as the wise older person who give the background of what is happening. Owen doesn’t have a big role, but I found her to quite cute. Ferrell was good for comedic relief and the rest of the cast round it out well for what they needed.

Something else I found to be good were the effects. I’m assuming there was a combination of practical and CGI, but they were done seamlessly for the most part. The look of Krampus himself was great. What I found interesting is we never get to see his face, as he is wearing a Santa mask or at least that’s what I think its wearing. I was completely fine with this. The elves also looked good, as their masks were creepy as well. The toys were much of the same. The only thing I had an issue with is the living ginger bread men. They were a little bit too out there for my liking. This film was shot beautifully though and I liked the effect of the storm to really make the film much more claustrophobic. The only other thing would be the soundtrack. It works by giving it that Christmas vibe that we needed. It also helps with the atmosphere of these characters and their plight. The sound design helps there as well which loud thumping above our characters, which again goes back to Santa Claus and what we grow up knowing.

Now with that said, I thought this film was good and I’m kicking myself for not seeing it earlier. I love the concept of Krampus. It is even more interesting the minions that he brought along with him. It is an interesting perversion of Santa. The only had issue I had with the effects would be the living cookies from his group. Aside from that, I think the rest are good. The acting I thought was good. The editing and pacing were solid with a good ending. It is quite bleak which I love. If you are a fan of the holidays and want to see a horror film that fits the spirit, I would recommend this one. I found this to be a great film for sure.