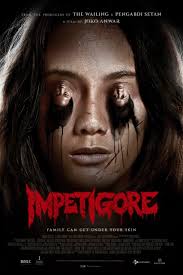 This was a movie that I heard about through podcasts and then saw it on the Shudder app. I didn’t put together that this is Indonesian until I learned that the writer/director was Joko Anwar. I really enjoyed this previous film of Satan’s Slaves from a few years ago so I decided to give this a go. I will be honest, I did watch this on my phone while at my girlfriend’s parent house as well. The synopsis though is Maya (Tara Basro) and her best friend, Dini (Marissa Anita), try to survive in a city without a family. She realized that she might inherit a property from her rich family. Maya returns to the village, unaware of the danger waiting her.

We start this movie off with two young women as they’re working in toll booths. Maya is working in one that is slow and not very well lit. Dini on the other hand is constant. The two of them are talking on the phone to help pass the time. Their normal night gets darker though when Maya states there is a guy who has gone through a couple of times and tried talking to her. He comes back again and Maya panics when he pulls off. He walks up to the booth and asks if her name is Rahayu. She says no and Dini alerts the authorities. The man then comes back with a machete and chases after Maya. He cuts her leg and knocks her out before the police shoot him.

The movie then shifts 3 months ahead. The two women quit their jobs and opened up a clothing store. They are peddling things that aren’t very good looking and are cheap imitations. It appears most of their business is done online. The two women go into the bathroom. Maya sees a picture that she has of her family. Her aunt raised her and didn’t really tell her much of her past. When she sits on the toilet, the cut on her leg is still fresh looking and she pulls a note from it. She takes a picture, but accidentally drops it in the toilet.

Maya does have a picture of her family where there is a house she can see in the background. When the crazy man attacked her, he said the name of a small village no one really knows much about. There is a famous puppeteer of Ki Saptadi (Ario Bayu) who lives there. The two women take a bus and then an expensive horse drawn carriage to get there. As they enter, they see the house from Maya’s picture and it is huge. They search through it along with asking questions, which causes those in town to become suspicious. Some horrific things happened there 20 years ago that involve Maya, Saptadi, his mother of Nyi Misni (Christine Hakim), Ki Donowongso (Zidni Hakim) and Nyai Shinta (Faradina Mufti). Its effects are still being felt by the village.

That’s where I’m going to leave my recap and I’ve already stated that I was on board to check this out since I liked the writer/director’s previous film. This one really does have an interesting idea that hooked me from the beginning as well. The premise here works for me of Maya really being a type of orphan that was raised by her aunt. She doesn’t know much about her past. There’s the interesting dichotomy of Dini having a family and she really doesn’t seem much of them. Since I’m someone with a thirst for knowledge, seeing characters in movies like this helps me to connect.

There are similar elements here to what we got in Satan’s Slaves as well. I don’t know much about the family unit for individuals from Indonesia, but it seems there are some thick bonds. Having Maya not have that makes her feel like an outsider so I can believe she would seek out to find where she is from. I’m not going to lie though; it is creepy going all the way to this remote village like she does.

I bring up the family dynamic with what we see with Ki Saptadi. He lives with his mother who is quite overbearing. She is protective over her son and this does create issues to the overall story as we will see with things as they play out. Don’t take this as a spoiler. The moment that we get to the village, we get that feeling and it doesn’t take long to confirm.

I will share a bit that the curse on this village. Anyone who has a baby, it is born without skin. I won’t share why it is happening, what the cause of it is, as there are a lot of moving parts with this to be honest and this is where I want to tread lightly to not spoil the reveal. What I will bring up though is that everyone in this small village blames Ki Donowongso and his daughter of Rahayu. It is horrible thing to have happen, but on top of that, the village will die out.

After dropping that on you, I want to shift this over to the fact that Anwar does such a great job with building tension in his movies. This one runs around 105 minutes, but to be honest, it didn’t feel like it. This film does an excellent job hooking me in with this wild first sequence and then I’m someone who likes to investigate so I’m there trying to figure out what is going on. With the fact you have child birth as part of it, which freaks me out in normal circumstances, I’m there too. He also loves to show us the duality of organized religion, in this case Islam, with the more primitive beliefs that were on the islands before. The superstitious things that happen make me think of things my mother would tell me that her and her family would believe. Not as magic or dark as we get here, but my way of connecting.

That will take me next to the acting. Basro was also in Satan’s Slaves and I thought she was good there. She follows it up for me with this movie which she also plays another really good character. She is strong willed and I believe that she will get to the bottom of everything no matter what. This is paired well with Anita who doesn’t necessarily want to find the truth, but she wants to go on the adventure with her friend. I mean, there’s also a chance Maya will end up being rich. I don’t think that is main motivation, but she dos like to joke with her. Bayu is good as someone you don’t know if you can trust or not. Then there’s Misni. I completely despised this woman from first meeting with her so I have to give credit to her for how well she plays this role. Aside from that, the rest rounded this out for what was needed. It was a bit difficult to keep some people straight, but I think Anwar does well for me to figure things out despite not being up on the culture.

Shifting this over to the effects of the movie, I think that they do a solid job there. There aren’t a lot to be honest, but what they do with the practical effects is well done. It really looks like when Maya gets her leg cut that it is happening. I’m sure they use CGI for what happens with Dini, but it was framed and shot in a way where I can’t tell. Anwar knows how to shoot a movie as well. The framing, depth of field and some of the other things that are done with the cinematography are amazing.

The last thing to go over would be the soundtrack. I really like that this opening attack sequence is paired up with a creepy, upbeat song. It doesn’t sound like it would fit and it gives it an eerie feel with what they do. Aside from that, there is chanting that makes me feel uncomfortable and the rest of the score really helps to accent what is needed in making this movie feel creepy.

Now with that said, I really liked this movie. Anwar does some interesting things again with this movie and it pairs well with Satan’s Slaves in some of the themes. I like the blending of old world with the new, modern world with religion as well as some of the other aspects to the story. The acting is solid across the board. Effects and soundtrack are both good to help build up the tension along with the feel of the movie. The last thing would be that I think the cinematography is both creepy and beautifully done. I’d say this movie is good and one that I might just have to revisit before the year ends.