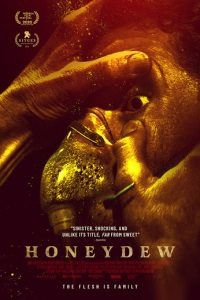 This was a movie that I got turned on to thanks to the horror community. I saw a lot of people talking about seeing this and I put it on my list of 2021 releases to see. Decided this would make an interesting double feature as part of Journey with a Cinephile: A Horror Movie Podcast as one of the featured reviews as well. Aside from that, I did come in not really knowing what this about as well. The synopsis here is strange cravings and hallucinations befall a young couple after seeking shelter in the home of an aging farmer and her peculiar son.

Where I should start here is stating that this movie is somewhat arthouse. It isn’t over the top like some movies I’ve seen, but it is odd. We start with a funeral. Karen (Barbara Kingsley) is quite upset and while this is happening, we see a hunter in the background. It does get quite jarring as this hunter fires his gun while being paired with quiet and subdued scene.

It then shifts us over to a car. Driving is Sam (Sawyer Spielberg). We learn that he’s an aspiring actor. With him is his girlfriend of Rylie (Malin Barr). She is a grad student and as things go, we learn she is there to do some research. What I like here is that she is watching a video about something called Sordico. Apparently this is a fungus that gets on wheat and other crops. It is harmful to humans where it will make people sick and continuous ingesting of it can cause gangrene.

As they are going, Sam stops as the GPS isn’t working. We get an interesting look at this couple where we can see they love each other, but they’ve spent a lot of time together so things get testy. Sam gets out to check on the tires and then asks this odd thin young man, Joshua Patrick Dudley, for directions. He doesn’t respond though. Since it is getting dark out, they camp out in a nearby field.

Their night is interrupted. They are camping out on Eulis’ (Stephen D’Ambrose) land. He tells them they can’t stay there and have to go. They pack up their things, but they run into another problem, their car won’t start. They’re forced to walk to town, but happen upon a farmhouse. It is owned by Karen. They meet her and her ‘son’ Gunni (Jamie Bradley). She makes a call to a local guy who will come over to help, but it will take time to get there. She offers the two of them dinner and place to stay until he does.

This ends up taking a turn though as we notice some odd things about this family. Part of it is that Karen’s finger is blackened and Gunni is acting funny. There are some grisly discoveries that turn his odd experience into a nightmare as these two try to survive.

That is where I’m going to leave my recap as I feel that gets you up to speed. To start here where I left off a bit earlier is the arthouse feel to the movie. We have a fairly straight forward narrative like my recap has. There are some things though we don’t necessarily know if some things are real or not due to hallucinations. Also with how some things are shot and the music selections add to this feel as well. Where I really want to start delving into though would be the story.

The movie is interesting in introducing us to Karen in a way first. We don’t know that is her name, but we get that she is the mourning woman at the funeral. This is also interesting as well that Gunni is in the background. He’s the hunter. This funeral is interrupted by his gunshot which really can be a bit jarring in a good way. It is from here we get to meet our main characters and them giving us a general idea of what we’re going to get. I think the writing for this opening works well.

Speaking of that, this idea of Sordico is interesting to me. This reminds me of Children of the Corn II where they have a mold that grows on the corn as well. It might even be the same thing we’re dealing with here to be honest. I like that we get introduced to it through Rylie and then we learn she is there to study it. Things from this video she is watching are shown to us while we are at the farmhouse. Karen is a bit simpler so she doesn’t know what she is talking about aside from the cow deaths in the area and knowing the gossip from around her. This moves us into the movie farther knowing that things we’ve heard are in fact happening here.

The movie is quite ambiguous though as well. To an extent, I like that it isn’t force-feeding us, pun intended, but I do think it leaves some things a bit too vague. The movie really does rely more on atmosphere, which it does a great job in building. I understand why the things that are being done are due to madness, but I guess I want a bit more as to certain things were chosen. This doesn’t ruin things for me. I just feel for the 106 minute runtime, it drags as things go on for me as I just needed a bit more explanation.

To get back to the positives, I want to breakdown the atmosphere a bit. First would be the cinematography. We get some interesting shots in this movie. We see things in split screen when Rylie and Sam are apart but what I like is that they’re doing things that are similar. This is used a few different times and I enjoyed it. The house they stay at is creepy as well. I’ve been in old farm houses and this place reminds me of my grandparents’ place. This one is dirtier though. It just has that feel of being lost in a time a bit with some of the technology and set up. I’m really impressed what they did here for sure.

The other part of the atmosphere would be the music selections. They rotate between a few different things. We get some diegtic sounds from different rooms that are creepy. The older televisions being used is another. We also have a few different types of music being used. Some are more sound-based while we also have choir type singing added in as well. This really helps to build this unnerving vibe that the movie really needs. When things on the screen aren’t scary or creepy, the feel the movie is giving off is there.

That will take me to the acting next. I think that Spielberg and Barr do well as this couple. I feel like they’ve known each other for years. They are able to get under each other’s skin with little things they say which feels real. I was watching this and thinking about my relationship with my fiancé. Kingsley does well as Karen. I also think that Bradley does a really good job as Gunni. This is a broken character that at first seems to just have a mental disability. The reveal there is interesting. Aside from that I think D’Ambrose was fine along with an appearance by Lena Dunham as Delilah. They all rounded this out for what was needed.

In conclusion, I think this movie has some interesting things going for it. The basic concept and story here works with the atmosphere built by the soundtrack and cinematography. What effects we do get are fine, there aren’t a lot there. The acting I think works with bringing these characters to life. If I have any issues, I think a bit more could have been fleshed out to help keep the direction of the movie. As it stands, I did lose interest a bit later in the movie as I got confused with some things. This is really watching a nightmare unfold. Overall I’d say though this is an above average movie for me due to some of things it is lacking.