Homepage > Genuine: The Tragedy of a Vampire

Genuine: The Tragedy of a Vampire 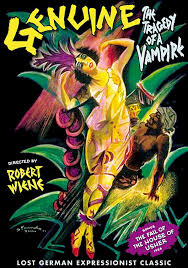 Film: Genuine: The Tragedy of a Vampire

This was a film that I don’t really recall hearing about before looking into horror films from the 1920s. For my podcast, I’m doing Centennial Club episodes of pairing two films 100 years apart and so I was knocking off the next film from 1920 here. The synopsis on the Internet Movie Database isn’t that good, but it is about a woman that uses her charm to persuade men to do things they normally wouldn’t.

We start this movie in the room of a painter, William Percy (Harald Paulsen). He just completed his masterpiece of a famous heathen priestess from a legend. Percy has been moody since it has been completed. His friends are worried about him and want him to rid himself of his creation. Lord Melo (Ernst Gronau) inquires about purchasing the painting, but he’s denied. Percy’s two friends inform him they’ll convince him to change his mind. Percy then falls asleep and the painting comes to life behind him.

It takes us to telling the story of Genuine (Fern Andra). She was the priestess of her tribe, but they’re conquered by rivals. She’s taken and sold into slavery. It is then she is purchased by Lord Melo, who falls in love with her. He keeps her hidden away in a room in his basement. He is doing this though to protect her, as he feels the world around them is ugly and brutal.

Every day at noon, Guyard (John Gottowt) comes to his home to cut his hair. Lord Melo doesn’t have much, so it is pretty much getting it shaved where no hair is present. Guyard draws the attention of those around him and they start to inquire. The barber goes home one day inform his nephew, Florian (Hans Heinrich von Twardoski), that he’s prepared for him to be his apprentice. Percy (Paulsen) also wants to visit with his grandfather he hasn’t seen in some time. Lord Melo agrees, but is curious to how Genuine will react.

It all comes to a head though when Guyard is summoned before the magistrate due to the townspeople being nosey. He sends Florian to cut Lord Melo’s hair for disastrous results. Genuine discovers how to escape and she involves herself in everything that is happening where she uses her charm to make Florian as well as Percy do things they normally wouldn’t and it gets out of hand.

Now my original viewing of this was a 44 minute cut I have on DVD. I happened to check YouTube to find the full 88 minute cut available and have now watched both. I’m glad that I did, because some of my problems were resolved with that second viewing. Not all of them though.

I would have to say that my issue with this movie is that I don’t really think this woman is a vampire. There’s a scene where we see that after Percy’s encounter with her, he does look quite wild and pale like he could have had blood drained from him. We don’t get any indications that happened. It is possible that she could be more of an energy sucking vampire. I actually think though it is more that what he did bothers him so deeply as well as his love for Genuine and fearing he’s lost that. The men that she messed with do seem to be at their wits end after their encounters for sure. If anything, I would say that she is more of a witch. It makes more sense as the priestess of a tribe of people that were wild and she has the ability to make these men do what she says or they lose their mind for not doing so. I really just think she’s using her sexually as a weapon and this is how the men that created this are explaining it.

Regardless of what Genuine really is I think this movie does a really good job of creating a dream like atmosphere. This doesn’t do as well in creating that dream-like atmosphere with the sets like the director Robert Weine did with his other film from this year, The Cabinet of Dr. Caligari. Both are German Expressionism, but I just think that other film is stronger in what it’s doing there if I’m going to be perfectly honest. That’s not to say this doesn’t do similar things though.

After my second viewing, I did find this a bit more entertaining. A lot of it now is that I understand what the movie is getting at. I like this idea of telling us this legend through a dream that Percy is having. Everyone that is at his place before he goes to sleep is players in that story. I do think it is a bit problematic though. I still found myself bored during the latter half of the film. I also didn’t like the ending to the legend that is being told. It really is a tragedy, but I still believe my misogynistic take on it stands. I was satisfied in having the book-end to how things start and where things end.

That will take me to the acting, which I thought was okay. I do think that Andra was really good here. She is taking on a strong feminine character and I really liked it. She has a good look about her and I think the costume choices also helped there. Twardowski and Paulsen play similar roles, which I thought were good. They both lose themselves in Genuine and I thought that worked to show her strength. Gronau and the rest of the cast also rounded this out for what was needed, but no one really stood out to be honest.

I’ve already touched on the effects slightly. We don’t really get any in this movie, which doesn’t surprise me with how early into cinema we are. They could do things, but this movie didn’t necessarily require that. I did think that we got some interesting backdrops to some scenes, but nothing as strong like from Dr. Caligari. There is a dreamlike feel to some of the scenes, especially where Genuine is kept. I did think that her look as I said showed how wild she was. There is also a scene where we get superimposed images that are haunting someone. It is a common technique from the era, but it worked for what they needed. The cinematography was fine in my opinion as well.

The last thing to cover would be the soundtrack. I’ll once again say that I don’t know if the selections we’re hearing are the ones that the movie intended, but I dug what was used here. They did get a bit repetitive, as it felt like they used a couple of them over and over again, but I do have to reiterate that it worked. The selections were unnerving and really made me feel uncomfortable. This also seemed to help the atmosphere of the movie.

Now with that said, this isn’t my favorite from this year or from Wiene. I do think there are some interesting aspects to it. I like how strong of a character that Andra is with her portrayal of Genuine. This does have a misogynistic take on it, which I can’t fault the movie too much due to how long ago it came out. I had some issues with character development and story, but that was cleared up by viewing the longer version. I still found it to be boring though during the latter part. The visuals are fine and the DVD I have has a solid soundtrack to accompany it. I would still say that this is above average though. There are some good elements, but just lacking a bit.