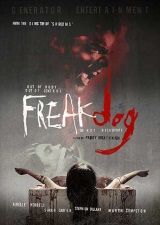 This film centers on a group of medical students. They are practicing on bringing patients back and the leader of the group is Arielle Kebbel. They fail, but the supervising doctor commends them. Kebbel is bothered by it, but is convinced by her fellow students to come out and party with them.

We also meet the stuttering, outcast played by Andrew Lee Potts. The film shows him cleaning an autopsy bed and then we see the depravity of his character. He removes a body from one of the closets, a female who is nude and records a video with his phone. The film shows a flashback from his childhood when he was a witness to his mother, who was a prostitute, being murdered in front of his eyes.

Potts listens to the conversations of the female doctors from the hallway and tries to speak to Kebbel. She tries to be nice, but her friends definitely are not.

The students go to a bar where they are not only drinking, but popping prescription pills that one of the male students takes from the pharmacy. While they’re all having a good time, we see Potts sitting alone watching them, taking a video on his phone of what they’re doing.

At the end of the night, he tries to ask Kebbel if he can walk her home and is made fun of by the others. To get a bit of revenge, he shows a video on his phone of the drugs being taken from the pharmacy. Panicked, they ask Kebbel to get him to come back and one of the guys decides to give him alcohol and drugs. A strobe light is going off during this and he goes into an epileptic seizure. Fearing for their careers, they drop Potts of outside the ER.

Left in a coma, Kebbel tries to help him by giving him some drugs that are experimental. It shows some change, but it also gives Potts the ability to leave his body and take over others. With this, he begins to extract his revenge.

What I liked about this film was that it has great concept, but it really just becomes a few interesting, gory scenes. I feel this film could have been a lot creepier and been something more, but definitely failed to do much more than that a few creative kill scenes. The acting to this film isn’t bad. Kebbel has done some mainstream things and I like Sarah Carter from the television show Falling Skies. There is also a British actress, MyAnna Buring, who I am a big fan of. She has been in a lot of similar horror films.

The writing to this film could have been better. It is a shame, because they did have a solid concept, but it just doesn’t work as well as it should on screen. This film with a little bit better writing could have been much better despite it having a low-budget.

With that being said, I would only watch this one if you’re a fan of horror films. As stated above, the concept is solid, the acting is decent, but this film’s actually screenplay holds it back. Not that bad of a film, but definitely could have been better. I would recommend this one only to fans of decent horror films.