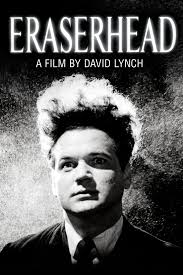 Now the first time I saw this film, I wasn’t entirely sure what I saw. This was actually my first foray into seeing anything from David Lynch and I really got to know how weird his films are. I was definitely intrigued by what I saw and I did get to see this film at the theater, hoping to understand a bit more now that I’ve heard some podcasters talking about it and being an older film watcher now. The synopsis is Henry Spencer (Jack Nance) tries to survive his industrial environment, his angry girlfriend and the unbearable screams of his newly born mutant child.

If you know anything about this movie, it is definitely odd. We start off seeing The Man in the Planet (Jack Fisk). He is looking out of his window and we see what appears to be space outside of it. He is also working levers. During this we see Henry’s head appear translucent and he opens his mouth, which a spermatozoon creature emerges and flies away.

We then see Henry walking through an industrial area. He steps into a puddle and goes into his apartment building. He goes up to his place when The Beautiful Girl Across the Hall (Judith Anna Roberts) comes out to tell him that his girlfriend called. She wants him to come to dinner with her family. He goes inside and we get a glimpse of his barren apartment. He takes off a wet sock and puts it on his radiator. We also see a tree growing from a pile of dirt on his nightstand.

He goes to his girlfriend’s house, Mary X (Charlotte Stewart). She scolds him, but finally lets him inside, stating that dinner is almost ready. He meets her mother Mrs. X (Jeanne Bates) and father Mr. X (Allen Joseph). We see a nightmarish scene as Henry goes to cut the small man-made chicken that Mr. X prepared, but it starts to wraith on the plate and bleed. Mrs. X has a fit before taking Henry aside to interrogate him about if he had sexual intercourse with her daughter. She tries to kiss him before being interrupted by Mary. It appears she had a baby that is Henry’s, but she isn’t sure if it is a baby. Mrs. X informs them they have to get married.

Henry’s life spirals out of control as their mutant child won’t stop crying. It drives Mrs. X into hysterics and Henry is in over his head. He is visited by the Lady in the Radiator (Laurel Near) who sings songs for him and the Beautiful Woman Girl Across the Hall. What does the Man in the Planet have to do with all of this and can Henry get control before it is too late?

I should lead this review off stating that this is definitely an arthouse film. If you don’t like movies like that, avoid this one. The first time I saw this, I had no idea what I had seen and I came in this time around with what others thought this was trying to say to see if I could agree there. The major one I really can get behind is that this could be about fatherhood and how your life changes with it. This is coming from someone who doesn’t have children though.

The first thing that we get is Mary leaving Henry. I’ve heard of a new expecting mother leaving the guy who was with for a stretch out of fear with what to do. Her parents pressure the two of them to get married and they’re forced to live together. They’re in over their heads and can’t take care of the needs of the child, which in this case is a mutant that nothing they do will get the child to stop crying. Mary can’t handle it and she flees to her parents where we then see Henry lose control as the child becomes sick and is just kind of lost. His life completely changes extremely fast and there’s nothing he can do to stop it.

Going from this, we have an extremely bleak look at life. The world they’re in is desolate and that is added by the apartment that Henry lives in. The baby that he and Mary has is also a mutant, which makes me wonder if this world being an industrialized as it is has poisoned her to create this. Compound the fact on to this of the tiny birds that Mr. X is trying to feed them. The Lady in the Radiator also is deformed and I’m not entirely sure she is real. I believe this is Henry’s imagination to cope with his world falling down around him. The Man in the Planet I also can see as his inner conscious controlling him and failing later in this.

Now I could be completely wrong about all of this, but just what I felt we were seeing along with what other people have tossed out there. This is also paced very weird and I know that is intentional. We get scenes that go on too long and have a lot of silence in them. This gives it a very awkward feeling that all of the actors definitely contribute to. I would even go as far to say that this is isn’t necessarily horror, but we get images that are and bleak feel of the film really make me consider it that way, as well as to write this. The tension is built through these aspects, but not really in the traditional sense. I can’t really say I like the ending, because it kind of just ends. The only thing that I will say is that Henry does seem to find some solace finally and I’m good with that, even though it isn’t necessarily happy.

I’ll shift to the acting of the film, which I will say is amateur, but I dig it. Nance does fit the role of someone who is kind of being pulled in multiple directions and loses control of his life. I like it though, as I feel like it is kind of like how I feel at times when I’m not assertive. I can definitely commiserate when his life is falling apart as well. Stewart is fine in her role and what she does to contribute to Henry’s downfall and the same can be said for Roberts, Joseph and Bates. Near does give him something to look forward to and I kind of dug her singing in a weird way. I would say the other actors we see here do round out for what was needed.

The effects of the movie are actually really good for the budget here. The baby is extremely creepy and the things they do with it made me feel uneasy as it goes on. I have to give props there. They also do some classic things with it, like using two reels together to make one of them look translucent which I thought worked. This is filmed in black and white, so that definitely can mask things and gives this a vintage feel as well. David Lynch was the writer/director among other things, which he definitely shot this amazing. You can see the talent he would have as he goes on.

Last thing to cover would the soundtrack, which is used masterfully here. It definitely made me feel uneasy quite a few times, which really helps make this feel like horror. The baby crying is annoying and really shows how Mary is driven crazy like she is. The songs that the Lady in the Radiator sings I kind of dug in a weird way. This is one of the strongest parts of the film if I’m completely honest.

Now with that said, I’ve already laid out to who I would recommend this film for. I really dig arthouse and films that make me think. I would actually like to know what Lynch was thinking, but he really doesn’t care to answer that or what he was intending. I do think there’s some good social commentary here about being young parents and living in a bleak world, which can be fitting for how some people want to treat the environment. This doesn’t do a lot of things in the traditional sense, like the pacing or the editing, but I can get behind that. The acting is good and I think the effects, even though some are dated actually really work here. I think the soundtrack is amazing though and really helps with the nightmare feel of this film. Overall I found this to be a good movie and would recommend it if you like Lynch or are into these type of arthouse films that aren’t necessarily coherent.