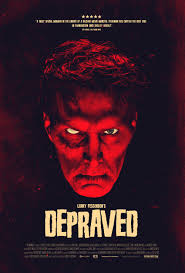 This was a film that I was intrigued to check out when I saw that it was going to be a Frankenstein film from Larry Fessenden. I’m a fan of his works now that I’ve delve more into them. This is one that I caught at the Gateway Film Center and now giving a second viewing as part of the Summer Series for the Podcast Under the Stairs. The synopsis is a disillusioned field surgeon suffering from PTSD makes a man out of body parts and brings him to life in a Brooklyn loft.

We start this film with a couple as they’re making love. They are at Lucy’s (Chloë Levine) pace and Alex (Owen Campbell) is going to be moving in soon. They get into an argument when Lucy makes a comment about him making a good father. He leaves and he is attacked by someone on the street. He is stabbed in the chest.

It then shifts to Adam (Alex Breaux) waking up. He checks a mirror but doesn’t recognize himself or seem to remember anything. Henry (David Call) comes in and takes him to another room. We then see that he is trying to teach him the basic functions of being a human. Adam does get some flashes of the past through memories but can’t put them together. Somehow, Alex is involved.

Delving more into this, we get an interesting interaction where Liz (Ana Kayne) is looking for her boyfriend, who is Henry, and what he is doing. She ends up meeting Adam. It is through conversations though we learn that Polidori (Joshua Leonard) is funding this operation. They’re trying to show that a new drug has practical and military applications. Adam is the first test subject and they’re doing it in secret.

The problem becomes that the more Adam learns, the more he wants human interactions. Henry doesn’t think he is ready and starts to have second thoughts where Polidori’s career and money are riding on this. The problem is though, Adam does have a say in this as well. He sees what Henry and Polidori have which makes him crave for that companionship.

Now I wanted to go a little bit vague with my recap here, because if I’m honest there’s not a lot to the story itself. I will give credit to writer/director Fessenden is that he does a great job here of adapting a good portion of the Frankenstein novel to a modern time. I won’t break it all down as that would go into spoilers, but there are some things that I want to go over.

The first part has to do with Henry. It isn’t a coincidence that is the name from the Universal Classic for the doctor, instead of going with the name from the novel. Even Polidori makes a comment on this bringing a bit of meta into this film. I’m not sure if he’s making a joke or if that is really his name, but I do think this is slightly heavy handed. I like the reason that Henry agrees to do this though. He was a field surgeon in the military and when he lost a patient, it messed with him. His obsession was with trying to save everyone and he can’t. He tried to reattach limbs in the field and that’s when Polidori hears about it. Now that he’s back, he’s struggling with carrying a normal life due to the PTSD of his time serving. He isn’t ready for help which creates issues with Liz, who is a psychiatrist or a psychologist of sorts.

Polidori is an interesting character as he is a quasi-villain. What I like about this is that Fessenden does a great job making the entire cast of characters complex to where you must decide morally who to back and who not to. I personally find that to be a strong move as it makes me think and decide instead of being thrust into what the movie wants. Polidori is probably the only character you don’t side with after this second viewing. He is out to make a name for himself and to make a lot of money, regardless of how or who he hurts in the process. Much like the novel, this is questioning who is more of a monster, Adam or Polidori? This is more rhetorical than an actual question though.

Adam is also solid as the monster here. He is constructed of body parts and is using a brain that is flashing images to him. This film goes arthouse here as we are seeing different things happening in the brain superimposed over the images on the screen. I do think this can be a bit cumbersome at times, but I also found it interesting. We are getting what he is experiencing internally. It is hard to also blame Adam for anything bad he does. He doesn’t remember basic humanity as he must be re-taught. He doesn’t know right from wrong, which makes him just a step up from animal with great strength. Using the name Adam is also interesting. It is meta that Henry is pointing out that it is a clinch, being the first like this. I like there is a deeper reason here that goes back to Henry and his military service.

Then a last bit for the story, we are getting a social commentary on the drug industry. Polidori is convinced that this drug he created is what is making Adam function. He convinces him that no matter what, Adam needs to continue to take this medicine. We also get an interesting scene where Polidori is having dinner with his wife’s parents and his father-in-law is a bigwig at the company he is working for. I can see why he is trying to make a name for himself even more. Big pharmaceuticals are a problem in the United States so I did like see a commentary there.

Something I did have an issue with though was the pacing. The movie runs almost two hours and I think it is too long. I understand that we need some aspects here. Like we need to see him learning things, but we kind of just get a lot of the same thing repeatedly, which I do think bogs this down. I like where it ends up and as I said, if you know the story of Frankenstein you can pick up the different points throughout. It just needed to be tightened up.

That moves me to the acting, which I think is solid. I like that at first Call is on-board with what he’s doing, but the more he sees Adam grow, the worse he feels. There is growth and humanity there that I like. He does want to destroy this creation, knowing that they defied the laws of nature and doing a disservice to his creation. Leonard is good as the villain here who is mostly money hungry. I thought Breaux has a good look as the monster and I like how he plays the role. Kayne is quite attractive and I liked her performance. Same could be said for Levine and it was interesting to see Campbell in his limited role as Alex. He did a solid job too. Shout out as well to Addison Timlin, she was quite attractive as well. She plays someone who interacts with Adam. The rest of the cast rounded out the film for what was needed.

As for the effects of the film, they were well done. They were mostly practical from what I could tell which I expect nothing less from a low budget filmmaker like Fessenden. I do like the scars and the look they use on Adam to show he is pieced together. There is a bit of CGI, but I didn’t mind it. I did think they overused the reactions and how things would look inside the brain, but it doesn’t ruin the film. This is shot well so I will give credit to the cinematography. The soundtrack was also fine without necessarily standing out.

Now with that said, this was an interesting take on the classic tale. I really like the updates that are made to the story. The motivations of the characters are believable and it makes Adam a tragic character. I think that the movie does run a bit long and could have been tightened up. I could see the points from the novel that are used which I’m a sucker for. I thought the acting was good across the board as were the effects, especially the scars on Adam. The CGI was also solid, but they did overuse a bit of it. The soundtrack didn’t really stand out to me. It also didn’t hurt the film as it did fit for what was needed. I don’t think this is a great movie, but a solid adaptation to the classic tale for sure. I think the movie is above average.