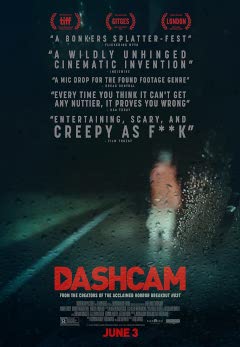 This is a movie that I head mixed things about. Some people enjoyed this while others were not so much. What I didn’t realize is that this was co-written and directed by Rob Savage, who did the movie Host that hit Shudder last year and made quite the splash. This is another take using found footage/mockumentary with horror during the pandemic. I decided to watch this since I couldn’t make the times to go to the theater work or there wasn’t a 2022 horror release either.

Synopsis: two friends embark on a horror-fueled road trip and livestream the most terrifying night of their lives.

We start this off meeting our lead, Annie Hardy (playing herself). I heard through reviews that she has a social media presence. Her gimmick seems to be that she drives around in her car, people watching give her words to make into a rhyme and she makes songs this way. It also sets up that she is far right with her beliefs. This is during the lockdown and she protests masks. She also has a ‘Make America Great Again’ hat.

Annie heads off to London where she surprises her friend Stretch (Amar Chadha-Patel). She didn’t tell him she was coming and found his spare key to let herself in. She ends up waking him up along with his girlfriend, terrifying them both. Stretch’s girlfriend is Gemma (Jemma Moore) and she takes the pandemic seriously. This causes Annie to mock her. It appears that she didn’t realize Stretch shares the same beliefs. Tension is created between this trio.

Stretch takes Annie along as he delivers food through UberEATS or a similar app. In the car they make up rap songs. Annie makes his work more difficult by causing scenes inside restaurants. She likes to press buttons and rile people up. It ends up with Stretch freaking out on her. Back at the apartment, Stretch and Gemma debate what to do. Annie takes his car keys and phone. She heads out into the night.

Annie doesn’t seem to understand consequences. That will change though. She accepts an offer to pick up food, but her plan is to eat it. She goes to a café that doesn’t look open. Inside, she meets Seylan (Seylan Baxter). For extra money, she asks her to take Angela (Angela Enahoro) to another location. There is something off about this woman. She is wearing a mask and acts strangely. Annie agrees though. This is just the start of the oddest night of her life that turns into a nightmare and possible encounters with the supernatural.

That is where I’m going to leave my recap and introduction of the characters. Where I’ll start my breakdown is something that I heard on a podcast about this movie as well as the title of a review from the Internet Movie Database. The latter was ‘almost too relentless’. That is spot on as this can be hard to follow. The other thing was that Annie is an unlikeable character. I can also see this. Before I delve deeper into these, I want to start with positives. Savage is solid at making these type of horror movies. I don’t know if this works as well as Host, but this still was creepy. This almost feels in the same world and part of that could be the mockumentary connection. He is good at showing a world like our own, but having supernatural elements mixed in.

Where I’ll then take this is the character of Annie. I’ll be honest, I looked her up on Twitter after the movie ended to see if these are really her beliefs or if she was playing a caricature. What I found is that part of seems to be real and that she likes to press buttons. That is what her character does here and even though I don’t agree with her or doing that, I think it is effective. It also makes me want to see bad things happen to her during this night, because she needs to be taught a lesson. In real life, I don’t care what she believes. Her style of comedy isn’t for me, but good for her for the following that she has. Hardy’s performance is obnoxious, but I think that it works. Credit to her for getting that reaction out of me.

Next, I want to delve into the other thing I brought up already about this being too relentless. Having our characters film this with phones and dash cameras is cool. It explains some of the time why they’re filming. There were a few times that I think they wouldn’t be and trying harder to survive. I get it though. This is still a movie and they must film for us to see it. I also liked that we have the comments section scrolling on the side of the screen. This works to an extent. It is too difficult to read those and pay attention to what is happening on screen for me. I’m glad that when service is lost, they go away. That helped at times to be a bit less manic. There are creepy things within the frame of shots and that was good. I’ll give credit to the cinematography there. I just think that we get a lot happening in a short amount of time and it can be hard to keep up with to the point where I was worried that I might not be able to get everything that I wanted down for this review.

The last bit for the story will be what we are getting here. Annie takes Stretch’s car and phone when she shouldn’t. This leads to taking an order from a café that causes her to be asked to take Angela a house in the middle of nowhere. More information isn’t given from there. We see things aren’t right with her. The movie does subtle things to reveal information about her. Angela has a tattoo of Ariana Grande, which is odd for how old she looks. This woman also defecates on herself and bleeds from the mouth. This is the just the start of though. There are things that could explain what is happening, but this is an interesting take on the possession movie. Since things happen over a short amount of time within this night, we don’t learn what is inside Angela and we also don’t get an exorcism. Doing something a bit different works for me.

I’ll then go over to the acting. I’ve already said my piece on Hardy. I thought that Chadha-Patel worked as her counterpart. What is interesting there is that they were in a band together so he is more forgiving of her antics. I like that even he gets fed up with her. She pulls him into this nightmare which makes me feel sorry for him. I’d give credit to Enahoro here. She is quite creepy and it just gets worse from there. I’d also credit the make-up as well. Other than that, I’d say the rest of the cast is fine. No one stands out, but they help push our characters to where they need to.

The last things to go into would be with filmmaking. First, the effects are good. I know there is CGI here, but since this is a found footage movie, which helps hides it. They are just quick movements to hide it, which prevents critiquing it too hard. If anything, I wish this movie could have slowed down just a bit. With such a low runtime, they could have built more tension instead of just going more for jump-scare after jump-scare. You can still slow it slightly and keep that intensity. Other than that, there is the soundtrack. Everything we are hearing is diegetic. That adds realism. The songs that Annie comes up with aren’t good, but they can be funny. The beats that she has though are solid. I did want to give credit there.

In conclusion, this movie is an interesting one. We have an annoying character with Annie who is playing an over-the-top version of herself. I don’t agree with politics, but I think what she is doing works in the frame of what this film needs. The rest of the cast around her is fine. This has a low runtime which I think hurts this slightly. Things go just too fast and it can be difficult to keep up. I like what we get with the effects. The sound design was good. This is probably going to be divisive. I think some won’t be able to get past her antics or political stance. For me, I think it is done for us to want to see bad things happen and not feel as bad. This is an above average movie to me. It is worth a watch if you like this subgenre.