Cyrus: Mind of a Serial Killer 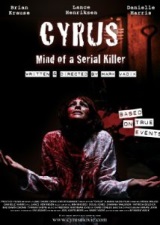 In this film, we have a reporter, played by Danielle Harris, who from what it seems goes around interviewing experts on serial killers, victims and towns where they prowled. She is in a small town with her camera man trying to investigate the large number of missing persons in a Midwestern town along with the killer known as ‘The Night Hunter’ or the ‘County Line Cannibal’.

At first no one will speak with her, but she finally gets someone who will be interviewed. She goes there and the man, played by Lance Henriksen, gives them little information. After some convincing, he finally tells them the story of Cyrus, but only as long as they don’t air the footage.

We finally meet our title character, played by Brian Krause. He has returned from war where he was in POW camp and with the military back-pay has bought a farm. His wife is less than thrilled and begins to loath her husband. She had dreams living in the big city. She grew up on a farm, not wanting that life again.

One day, Krause gets the idea to open up a roadside diner, where he can sell meat he hunts since he is accomplished hunter and tracker. His wife begins to have an affair with the salesmen he bought the grill from and Krause snaps. Killing his first victims, or are they? Another important question, how does Henriksen know so much about the case? He acts like it is town knowledge, but if that’s so, why don’t they do something about it?

This film does well at portraying serial killers from what we know. They have ‘experts’ who say give all the information and they are cut into the movie. Every time they give information, the film will back that up with an example of Krause doing that.

With that being said, this film doesn’t have very good acting. Krause doesn’t show any emotion, but it doesn’t seem natural for it and doesn’t come off well. Henriksen is great at being who he is and Harris seemed real to me as well. Of the victims, the three seemed terrified to me and that came off real as well.

This film isn’t very good, but it tries really hard to be. The story isn’t all that plausible. I believe board of health would have investigated a lot earlier and this film wouldn’t have been possible in real life. With that being said, it isn’t completely horrible, I’ve definitely seen worse, so if you like horror I’d say give it a chance if you like low-budget horror films, but don’t expect anything great.