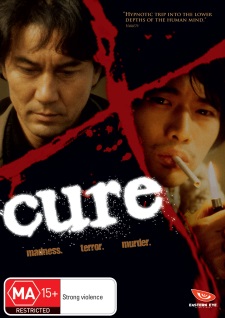 Something I’ve told people about my viewing history is that there’s certain areas I’m borderline an expert on and there’s definitely gaps in my viewing history thus far. One of them is Asian horror films, as I’ve really only seen some of the more major ones. This one made the list of Top Horror films of the 1990’s for a podcast and I’m checking it out for that. I came into this one blind, not sure of what I was coming into. The synopsis is a frustrated detective deals with the case of several gruesome murders committed by people who have no recollection of what they’ve done.

This actually starts out with a woman reciting some information from the novel ‘Bluebeard’ to a doctor. We later learn that her name is Fumie Takabe (Anna Nakagawa) and much more about her life.

She is married to Kenichi Takabe (Kôji Yakusho). He is a detective and he’s investigating a murder. After the second one, he realizes that they have the same MO, but they have no connections. He is baffled by this and trying to find the clue. We see that he’s quite stressed out as well. She tries to make him food and he tells her to rest, but she is insists. He asks her about going on a trip together and she tells him they don’t have to. He convinces her they should.

We then meet Kunio Mamiya (Masato Hagiwara). He’s on a beach and he has no idea what his name is. He meets a man there and he ends up going home with him. He asks a bunch of questions, sometimes repeating them, but Kunio doesn’t seem to remember anything. Soon after, the man he is staying with murders his wife and it matches to the other murders.

The man gets picked up by Oida (Denden) and taken into custody. He attempted suicide, but it didn’t work. Oida doesn’t get much out of Kunio, who asks him a bunch a questions before taking him to the hospital. He is released into custody of Dr. Akiko Miyajima. Oida does the same thing as the others and Dr. Miyajima as well. The man is finally picked up and Kenichi starts to interview him. Along with Makoto Sakuma (Tsuyoshi Ujiki), a psychologist, they try to learn who he is and his past, which leads down a dark and scary path.

Now I wanted to give as much background to this film without spoiling it, but there is really a lot here. I definitely found this interesting. It took me a bit to get into it, but we an interesting mystery here. Kunio has no idea who he is. Everyone he encounters tries to ask and he answers with questions. This ends up turning into him interrogating the interrogator and I liked that. What makes it even better though, he some how hypnotizes them into committing a murder and not remembering it.

The film really delves into trying to figure out who this man is. I like that Kenichi is able to find some information about him, like where he lives and then learns more about this man’s educational background. It even leads to a video from very early Japan, where we see someone hypnotized. What makes it even better though; we never actually get to see that person’s face and there’s a book that might lead to more information.

To delve a bit into our main character, Kenichi has such levels. Kunio points it out that this detective is about to break. He keeps his work life and his personal life separate. He is at the point in his life where the stress is becoming too much for him. He even puts his wife away in a mental hospital until he can figure out his work. The doctor comments on that he looks sicker and I found that interesting. He also has an anger problem, where he physically assaults Kunio and others in questioning. I just like that we get to see his descent into madness to solve this case.

That moves me to the pacing of the film. It really doesn’t waste any time getting into it. We really get introduced to the first murder on screen like 15 minutes into the film. It actually made me call out how brutal it was as well. The mystery kept me engaged to try to figure out what is going on here. My issue though is that there are some things left unexplained at the end and I wasn’t the biggest fan. I like an ambiguous ending when done right, but this one really just kind of ends. I wanted more and that hurt the film for me.

Something that didn’t hurt the film would be the acting. Yakusho is really good here. He is a detective that really does look like the stress has gotten to him and that he’s about to break. He has violent outbursts and really doesn’t know how to channel it. I really thought he did a solid job. Hagiwara is also good. I like that he can take these people who are trying to interview him and just turn it around on them. It is partially his spaced out look, but it just worked for me. Ujiki is a good counterpoint to Kenichi. I do feel bad for him in the end, but he is the one who keeps it together for the most part. Nakagawa is solid as well in her performance. She seems unstable, but the longer we go, we do really question that. Is what we’re seeing actually what Kenichi thinks is happening? The rest of the cast definitely rounded out the film for what was needed.

The effects of the film were really good as well. From what I could tell, they were all done practically which I’m a big fan of. I will admit there aren’t really a lot of them though. Many of this does happen off screen and if we do get them, they are usually with a long shot. I actually dug this though, as it is almost like we are bystander who is witnessing these things from a far. They did look good though and I had no issues. The film is shot very well also.

Now with that said, this film has an interesting mystery to it. I definitely like the idea of murders happening that are all very similar, but there is no connections at first to each other. It makes you wonder if religiously there’s something wrong with Kunio that is making these people commit the crimes that they are. There were some things that I would have liked explored just a bit more, but it doesn’t ruin the film. The ending was lacking a bit, but the mystery did suck me in and kept my interest all the way through. The acting was really good as well, which helps. The effects are done practically, but mostly shown from a far. I did find this to be an interesting move that worked for me. The soundtrack of the film didn’t really stand out, but it also didn’t hurt the film. It did fit the film for what was needed. Overall I did enjoy this film; I thought it was above average, it was just lacking a few things that could have made it better for me.