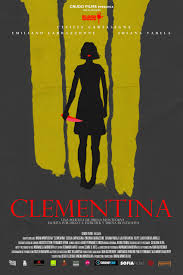 I had the pleasure of seeing this film when I attended the Nightmares Film Festival. This film actually kicked off the second day and I came in as blind as I could. The official synopsis for this film is after surviving her husband’s brutal assault; Juana’s (Cecilia Cartasegna) recovery is interrupted by a strange presence in the house.

As the synopsis states, we pick up with our main character Juana lying in a pool of her own blood. We also see that she was currently pregnant. Her neighbor, Olga (Susana Varela) is the one that finds her. When Juana wakes up she is in the hospital. She unfortunately had a miscarriage. There is a social worker and police officer that are there. They want her to tell them what happened. She refuses to talk, but they suspect her husband is one that did this to her. They finally give up and give her an alarm to alert them if he shows back up.

Juana then goes home and starts to piece her life back together. We get images of a better time with her and husband, Mateo (Emiliano Carrazzone). The two of them had just moved into the new house and it needs a lot work. Juana hears weird movements in her house and her neighbor confirms hearing them too. Juana starts to see the images of a little girl and decides that she is going to fix her life. She gets an idea of what to do when she goes back to work filing cases.

This was quite an interesting film, as it has some heavy subject matter. I like how this film starts off with the aftermath of the attack on Juana. It made me wonder if it was really her husband or if there was something supernatural that had a hand in all of this. Domestic violence isn’t a joke and it is something that is very relevant today. Her job also makes this film interesting. It seems like she works for an agency that advocates for clients who are in the system for court cases. I like how it gives her an idea of how to handle things.

That brings me to my next point for the film; it is actually very empowering for Juana. She is deal with the loss of her child. She is trying to isolate herself and not really coping with the horror of it, or I guess I should say that she is coping with it in her own way. There are people all around her that are trying to help her, which are good, but she really wants to get her own life back on track. A lot of this I interpreted is she has lost control of things around her and is trying to regain that. We see this as she is constantly scared of Carrazzone or something else in the house. As the film goes on though, she gets stronger.

Then there is the aspect of is this film supernatural or just her descending into madness. Not to spoil anything, but it never really gives an explanation, which I loved. It leaves it up to interpretation if that little girl she is seeing is real or not. It is kind of frustrating that Mateo scolds her for not getting rid of all of the toys, when the miscarriage happened so recently. I could clearly see that she had given up her grief yet.

I did think that there were some pacing issues. I like that we establish Juana’s life as it is broken and she is trying to put the pieces together. It did kind of drag on though. It really does have a slow-burn feel as it builds to what happens. I will admit it, that as the climax was approaching it does build the tension very quickly. That was definitely a perk. I thought the ending was quite interesting as it had a twist I didn’t really see coming.

This film was acted pretty well also. It has a cast of about six characters. Cartasegna was really good in this film. I thought she embodied the role. It was interesting to see her subtly deal with the grief of losing her child. I don’t think she has fully dealt with it yet, but she is working toward it. Carrazzone is established as being a good guy, but we know in the back of our mind that he is probably garbage. What I find interesting is that it doesn’t let us a viewer know if he did it or not until the climax. I thought this was a solid choice. Varela was solid as the neighbor who is concerned. I thought the rest of the cast portrayed their role well for what they needed. I also wanted to point out that the police officer who is trying to help is quite arrogant throughout the film and especially at the climax.

Effects for this film were done quite well. It looks as they were done practical, which was definitely a perk. There isn’t really much in the way of them until the climax, but they were quite amazing to be honest. It had me cringing. They looked quite real and one of the things especially looked like it really happened. The color of the blood looked amazing as well. I thought this was one of the stronger points of the film even though it isn’t used all that much.

The score of the film I thought was something that was quite strategically. Two points that really stood out to me was there is a moment where Juana turns on a song and then dances to it. It is established that she is a dancer and that was an interesting scene for the film. The other that stood out was actually the lack of a soundtrack. It built tension that is completely quiet while she is investigating. The use of sounds from other rooms and upstairs were also good.

Now with that said, I found this film to be quite interesting. We get the traumatic event of closing a child and trying to cope with that. Our main character distances herself from everyone and it makes us wonder if something supernatural happened or if she is descending into madness due to her grief. There are some pacing issues in establishing everything, but the film does pick up for a solid ending. The acting and the effects for this film were really good. The use of the soundtrack was something that was quite strategic. I will warn you that this film is from Argentina and is in Spanish. I watched it with subtitles on. If that is an issue, then I’d definitely avoid this one. If it’s not, I think this is an interesting film to check out.