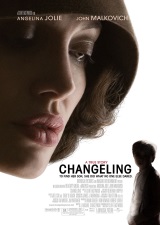 This film follows a mother and her child; she is played by Angelina Jolie. The father is not around and she does very well in raising him. We see a typical day where they ride the trolley, him going to school and her to work. She works as a floor manager for operators at the telephone company.

Jolie has planned to take her son to the movies, but she unexpectedly gets called into work. She leaves him home alone and has the neighbor lady check in on him. When she returns, he is gone. She checks around for him and finds no trace. She calls the police and they can’t do anything for 24 hours.

The search is on and it nets nothing. About 3 months later, a buy is found in Illinois who the police department believes to be her son. The police officer who is in charge of her case is played by Jeffrey Donovan. The boy arrives and Jolie tells him that isn’t her son. Donovan doesn’t want to hear any of it and tells her that she is mistaken.

Jolie takes the boy in, but doesn’t stop her search for the truth. She knows that this boy is posing as her son and Donovan does whatever it takes to stop her. He has the blessing of Colm Feore, the police chief, who is trying to fix the image of his police force that is full of corruption. There is also a minister who has a loud voice and radio time to point out the corruption of the police and government; he is played by John Malkovich.

Jolie’s plight brings a huge lawsuit against the city and the police’s corrupt handling of matters. It also brings on one of the largest court cases as another detective, played by Michael Kelly, investigates a crime where her son might have possible been a victim.

There isn’t a whole lot to say about this film other than it is amazing. The acting is superb from everyone and the story itself is amazing also. The story is true and it is hard to believe, which makes this one even better. Seeing the police trying to convince a woman that her son is this child, when any parent will know if it is or not. They ignore evidence all to make their force look better.

I am adding this one to the horror film research since as a parent this would be one of the scariest situations to be in. Her son has turned up missing; there is no evidence of what happened to them. To make matters worse, the police give a different boy and tell her that she is crazy. Not only that, the police stop looking, because they believe they have found him.