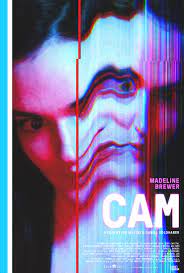 We start here with Lola (Brewer) as she is doing her cam show. She is in panties and tiny jacket. Lola is trying to crack the top 50. In order to do so, you need guys to tip you with tokens. Her latest show she is asking guys to decide which size of dildo to use, that is until a new user who has the username of visitor with a bunch of numbers. He sends violent messaging, demanding that she use a knife. She tries to block them, but they get right back in. Lola pulls a knife from her trunk and when she is tipped very well from this person, she slits her throat. It is all a gimmick though.

The mysterious user is actually her friend on this site of TinkerBoy. He was there to get the room riled up and he’s helping her move up rank. She is making plans with him to get into the bath until BarnacleBob wants to video chat. She switches over to him as she climbs into the tub.

We then get to see Lola’s real life, which includes her name being Alice. Her mother works at a salon and her name is Lynne (Melora Walters). Alice is there getting a haircut and we get to meet her brother Jordan (Devin Druid). He knows what Alice does, but she is keeping it from her mother. She wants to get a bit higher ranked before telling her. Lynne thinks that she does marketing online, which isn’t completely wrong.

Lola has some plans for shows and even cracks the top 50. That is until another woman, Princess_X (Samantha Robinson), is willing to break her rule of never getting nude to cause Lola to drop out. She tries to put on a happy face, but she is quite hurt with what her rival did. Things also become even more complicated when Alice thinks she sees Tinker in a store while talking to her friend of Katie (Jessica Parker Kennedy).

With what Princess_X did, Lola is willing to ride a sex toy that could cause her to lose all feeling. She has to go to a Cam Girl Clubhouse to do this. The next morning, she cannot get into her account. She checks and there is someone who looks like her on it, but it isn’t her. When she contacts customer support, they can’t find anything wrong and cannot seem to help her. What happened to the Lola account? It will lead Alice on a path of self-discovery and horror for the truth.

That is where I’m going to leave my recap as it gets you up to speed with what this movie is doing. What is interesting here is taking this world of Cam Girls and bringing a horror movie to a mainstream platform as I watched this on Netflix. Now I will admit I’ve been on a site like this. I am not afraid to admit it. At the time, I was a young man who was single and lonely. It wasn’t really for me for the amount of money that needed to be spent. I bring this up as my limited knowledge on this world.

Where I want to go then would be this world. This is really a precursor to sites like OnlyFans. The older I’ve gotten and the more life experience I’ve gained, I give any woman or man credit that does things like this. If you have people that are willing to pay you to do things, as long as you’re not forced into it and feel comfortable, do it. Alice seems lost and found something that she has had some success at. We do get to see how cutthroat this world can be with what Princess_X does to her. There is a bit of social commentary here as well that I didn’t pick up on until later.

I’m not going to spoil the ending, but it gets to be quite interesting. What I will say is that Alice is discovered by her mother and she does this. We get an interesting talk between the two that actually makes a lot of sense. Lola is faced with a difficult decision and what ends up happening in the end is probably the best course of action overall. This aspect was something that I really liked.

Now I do have to go a bit negative here. I’ll start positive; I love the progression of Alice not being able to get into her account. She tries to log in and it doesn’t work. She attempts to recover the password, calls customer support and even logs into the account to see that there was someone on it currently that looks like her. There is the revelation that it isn’t a recorded showing just being shown again. I was wondering where they were going to take this. The explanation was a bit lacking was the issue I was getting at. I like the showdown, but I also wanted just a bit more as well.

That feels like I’ve delved enough into the story and I’ll move it to the acting next. I was surprised by how well Brewer did in our lead role. Don’t get me wrong, I don’t think it was award worthy, but I like that she plays this quirky cam girl well. She really has to take on three roles. There is her as Alice, her as Lola and then Lola when it is the imposter. I thought she did well. I did like Darragh as this creepy guy that you don’t trust. Walters and Druid are solid as her family. The rest of the cast also rounded this out for who we should and shouldn’t trust.

Then really the last thing that I wanted to go into would be the cinematography and acting. For the former, I thought it was pretty solid. I enjoy the lighting for the cam girl set up. It is quite surreal as they’re somewhat living in a dream world. Then we get normal lighting for everything else to show that duality. We get some interesting use of mirrors, which makes sense when dealing with a doppelganger. Aside from that, we don’t get a lot of effects. I would say the blood looks good. The climax did make me cringe a bit so there is that. I’d say on the whole this was another positive part to the movie.

That is the extent of what I wanted to go into, so in conclusion, this is a solid movie in my opinion. It is taking a world that is looked down upon by the masses, but actually is a much larger industry than many realize. It is a scary story that has some interesting real world commentary around it. Brewer does a solid job as our lead with the rest of the cast around her in support. I like the cinematography, lighting and the effects used. The soundtrack didn’t stand out to me, but it fit for what was needed. If I did have an issue, I think the story could have fleshed out just a bit more for me. Regardless, this is still an above average movie for me. I would recommend it for sure.