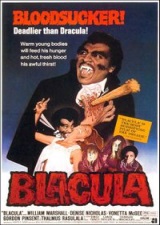 This film I actually thought was a joke growing up. I heard about it, but didn’t realize it was a legit film. It wasn’t until I took some film classes and started to look into the history of cinema that this was an important movie of Blaxploitation. I actually sought this out when I was watching all of the versions of Dracula. I didn’t necessarily care for this the first time, but having a bit more refined tastes and watching a documentary about the history of black cinema, I have a deeper appreciation. The synopsis is an ancient African prince, turned into a vampire by Dracula (Charles Macaulay), finds himself in modern Los Angeles.

We begin in 1780, in Transylvania at Castle Dracula. We have an African prince, Mamuwalde (William Marshall), along with his wife, Luva (Vonetta McGee), to meet with Count Dracula. Mamuwalde is there to put an end to the slave trade that Dracula is a large player in. He refuses to do so and after insulting his guest, he punishes Mamuwalde. He bites his neck, making him into a vampire and dubbing him Blacula. He leaves his wife there to die by the casket he is locked inside.

We then jump to present day, which in this case is 1972. There is an interracial, homosexual couple of Bobby McCoy (Ted Harris) and Billy Schaffer (Rick Metzler). They are at Castle Dracula and are buying it as well as all of its things. They’re antiques dealers and learning of the castle, they’re trying capitalize. Dracula is treated as a myth that has been exploited in films, but the man who is selling to them assures them that he was real. Everything is going back to Los Angeles, where they live.

Once there, the couple unlock a casket and Billy cuts his arm. The blood draws Blacula out and he kills both of them by draining them of blood.

Bobby is taken to a local funeral home where his friends come to view him. Blacula watches from the shadows and is intrigued when he sees Tina (McGee). She looks just like a modern version of his Luva. Her sister is Michelle (Denise Nicholas) and her boyfriend is Dr. Gordon Thomas (Thalmus Rasulala). He’s a doctor and starts to look into the strange death of Bobby. He asks the man at the funeral home about the wounds on his neck as well as how he’s completely dry of blood and yet it wasn’t from embalming.

Tina and Michelle are going to see Bobby’s mother, but Tina states she’s tired and if Michelle can go alone. Michelle tells her that’s fine. Tina is spooked when she comes around the corner, right into Blacula. He calls her by his wife’s name and she’s startled. She drops her purse and runs home. Blacula chases after her, but is hit by a taxi driven by Juanita Jones (Ketty Lester). She gets out and yells at him, but is attacked.

Dr. Thomas goes to check on the corpse of Juanita and notices the same markings on her neck as with Bobby. This causes him to go to the police for records on the attack of his friend and his associate. That night he goes out for Michelle’s birthday along with her sister. Blacula shows up and apologizes to Tina. She takes a liking to him, but Dr. Thomas isn’t the biggest fan. When Bobby’s body disappears from the morgue, Dr. Thomas knows something is up and it is something that science cannot explain.

As I’ve kind of alluded to earlier, this is a film that I wasn’t the biggest fan of the first time around as I thought it was more of a parody. Now that I really understand what is going on here, I actually appreciate it more. The first thing actually is Blacula’s interaction with Dracula. Blacula comes from a group in Africa, where he is educated and put together. He’s there to end the slave trade and is mocked by Dracula. I think this is quite progressive for the 1970’s to have Blacula being as outspoken he is to a white man in power. This was directed toward black audiences, so it is empowering there, but I bet some white people were offended.

Something else that I really noticed after watching Horror Noire is that many from this movement had black people in positions of power. Blacula is African royalty. We have Dr. Thomas who is a medical professional in a lab who works with the police. Michelle is his lab assistant. Really the only good white actor is Lt. Jack Peters (Gordon Pinsent). He works with Dr. Thomas, but we see that kind of takes secondary to him. It is progressive that we have an interracial gay couple of Bobby and Billy too. For the era, it is quite progressive for all of this and knowing more of the history, it helps to pave the way for things to come in cinema, but not immediately.

I do have to say that the way Blacula presents himself is a little bit off. Having it take place in the modern time of the movie becomes a bit problematic. I think that if Dr. Thomas thinks it is vampires as quickly as he does, why he wouldn’t assume it is Blacula since he’s literally wearing a cape in 1970’s LA. He does go by Mamuwalde, but regardless.

This does feel like a Dracula film as well. Now I normally harp when they push the relationship too quickly, but I don’t have an issue here since vampires have the ability. I’m assuming that he uses sound of his hypnotic powers so that would cause Tina to fall for him.

I want to shift to the pacing of the film, which I don’t have any issues there. We get introduced to the how Mamuwalde became Blacula and then quite quickly we are brought to modern times. From there he soon after sees Tina and goes about the seduction of her, while Blacula satisfies his blood thirst. On the flip side, Dr. Thomas immediately notices the markings on Bobby and then Juanita. The ending isn’t the greatest, but I don’t really have any issues there with what happens. I also think that the editing is good as well, no issues there.

Shifting to the acting, Marshall I think is great. He has such a commanding screen presence that being a black version of Dracula really does work. I could see how a woman would fall for him as well. McGee is also quite attractive. I don’t necessarily know if the movie does well at fleshing out Tina or Luva, but her performance is fine. We do get some comedy from Nicholas and we at least see her in an important position. Rasulala is pretty solid here and I like that he’s the doctor as well as hero. I think there’s some good support from Pinsent, Maculay and an appearance by Elisha Cook Jr. as Sam. They as well as the rest of the cast rounded out the film for what was needed.

Next would be the effects of the film. I think that for the most part they’re solid. I think the blood and the attack scenes are good. There’s a really creepy scene where Juanita in slow-motion runs down a hallway and that’s quite freaky. I like the look of the vampires for the most part. I don’t really understand the hair they have on Blacula’s face. Some of the fangs look a bit cheesy. There are also some scenes with him becoming a bat that doesn’t really hold up. The film is shot very well though.

That moves me next to the soundtrack of the film. There definitely are some moments that I think it really fit the scenes and helped to build the tension. There’s some times that being from the 70’s, it goes for more of the music of the era. I wasn’t the biggest fan of those moments as it took me out of the movie.

Now with that said, this film is pretty solid overall. Even though at first I wasn’t the biggest fan of a black Dracula, after learning more about the history, I’m definitely on board. There’s actually a bit of deeper social commentary here and I think that the acting really helps there as well. Marshall really does command the screen and Rasulala is a nice counterpoint. The film doesn’t waste time getting into it and never really gets boring either. The effects and the soundtrack can be a bit hit or miss, but not enough to ruin anything. I did definitely enjoy this film and I think that this is above average for sure. If you like vampire or Dracula films, give this a viewing and if exploitation cinema is interesting, I recommend this as well.