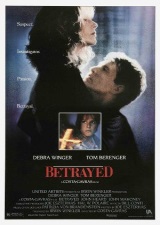 This film begins with a left-wing Jewish radio personality. We hear what he says over the airwaves and we hear him insult callers. We also learn that he is very successful at this and creates controversy. As he goes to leave the building he works at, a vehicle pulls up and a masked gunmen jumps out, shooting him by his car. With the man dead, the killer spray paints ‘ZOG’ across the car and his chest.

The film then shifts to some fields where farming is taking place. A drifter who runs a combine, played by Debra Winger, runs over a scarecrow. She stops her machine and meets Tom Berenger. Later that night, they dance and have some drinks together.

After another encounter in the fields, Berenger invites her over to his place for dinner. It looks like the normal farming family and she looks the role of the lonely woman looking for her place.

She goes to Chicago where we learn Winger is really a federal agent investigating a radical, racist group. She tells them she doesn’t believe he is part of the group. Much to the dismay of her boss, played by John Heard, who is convinced he is.

She returns to them and is persuaded by Berenger to go hunting. Once there she realizes they are hunting a black man. She realizes she is in the middle of the group she is looking for and has to decide whether or not to continue on with her assignment and stop them or to give up and get away before something happens to her.

I found this film to be very interesting. The group Berenger is in is despicable, but I believe he played a great role in this film. I did have a bit of trouble believing Winger as the FBI agent, but not to the point where it took away from the film. She plays it well though as she is faced with moral decision after moral decision on what to do.

The film though does move a little too fast and they initiate her into the organization a little bit too quickly, which again is a tad unbelievable they would trust her that fast, but if you can get around that, then I believe you will enjoy this.

This film is being included into the horror film research, because a group like this could exist. There are groups with as much hate as they show in this film and there have been killings like the ones this one has. It also would be terrifying to be Winger’s place as well. She is falling for Berenger and then you realize that he really is a horrible person. She is already in deep though. If you expose who you are, she will be killed, but this goes against her morals.

With that being said, not the best film in this genre, but still a solid watch and the story itself is actually quite engaging as well as bit scary that someone as normal as this can be a part of what they are. I would recommend watching this film.