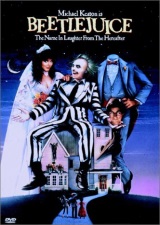 This film is one that I remember watching all the time growing up. My father owned this on VHS and it was one that I always just remember having. The funny thing is, I don’t remember watching it from the beginning so it must have been a recorded off TV. This was a staple for my sister and me. I’ve also seen this on the big screen at the Gateway Film Center.

Synopsis: the spirits of a deceased couple are harassed by an unbearable family that moved into their home. They hire a malicious spirit to drive them out.

We start off getting the lay of the land for a small town in Connecticut. We go to a big house where the married couple of Adam (Alec Baldwin) and Barbara (Geena Davis) live. They are currently taking a ‘stay-vacation’ for two weeks and that starts today. They’re bothered by their friend Jane Butterfield (Annie McEnroe) who’s a realtor and trying to get them to sell the house as it is too big for them. There’s a touchy moment where the couple wants children, it just hasn’t happened yet.

They go into town to get some supplies for Adam’s model he built of the town, but on the way back they avoid hitting a dog and crash into the river. They return home, sopping wet. A fire started in their fireplace on its own and they use it to warm up. As they do, Barbara’s fingers catch on fire, but she doesn’t feel it. They then realize they’re dead. There’s a handbook entitled ‘Handbook for the Recently Deceased’ that appears in their house. Adam tries to read through it, but he states that it reads like stereo instructions. When he goes outside of the door, he is transported to a desert where there are these giant sand worms patrolling.

We then get a quick cut to a man reading a newspaper, his name we will learn is Betelgeuse (Michael Keaton). He goes to the obituary page which he calls the classifieds. He sees the welcoming to the afterlife for Adam and Barbara.

Their plan is to live a nice quiet life as dead people, when a family moves in. They are from New York. The father is Charles (Jeffrey Jones) and his wife is a sculptor and loves art, Delia (Catherine O’Hara). Charles has an odd and gothic daughter Lydia (Winona Ryder). Delia’s friend also joins them, who’s an interior decorator and later claims to be a paranormal expert, Otho (Glenn Shadix). These two go about the rooms deciding what to do to it to renovate. This angers Adam and Barbara who try to scare them off. The problem is they don’t see the things they try to do. When they try to go into the attic, our ghostly couple keeps them out. Lydia notices them from the window and tries to meet them.

As this couple tries to figure out what to do, a commercial comes on their television from Betelgeuse. He offers to get rid of the family and they consider it. Adam did read in the manual that if they need help to draw a door. This takes them to a different world where it is like going to a social worker. It is there they meet their case manager Juno (Sylvia Sidney). They need to decide to scare them out or to learn to co-exist. She tells them not use Betelgeuse, no matter they do and she tells them the truth of him. Adam and Barbara befriend Lydia and must decide on how to proceed.

Now I’ve already said this, but growing up, I loved watching this film. It’s even more enjoyable now. There were a lot of jokes that went over my head that now crack me up. I will lead off that I used to work for a company that was outsourcing social work for the county. It is interesting that Otho makes a comment that if you kill yourself, you become a civil servant in the afterlife. He’s exactly right because Juno and all her staff seem to have committed suicide. I never caught on and that’s an interesting punishment. Despite how morbid this is, I find it funny.

We also get the issue of clashing lifestyles. Adam and Barbara live a modest one. He owns the local hardware store and they have simple things they enjoy. Jane feels their house is too big and wants to sell it. Charles had a breakdown at work, but it seems like he was ruthless and great at what he did. Delia doesn’t want to leave the city, but she will for her husband who was the breadwinner. It is interesting that he wants to relax, yet he can’t turn it off when he thinks he has a gold mine in this new town. He even pitches things to his former boss, Maxie Dean (Robert Goulet). There is an interesting look at capitalism vs. small town life that is clever.

Going back to the afterlife, there’s just a huge world here. They have a manual, rules and regulations as well as different workers that can help for different things. Since they’re dead, there’s also a lot of waiting. It is funny that Betelgeuse is a conman that you would see like injury lawyers or the like. The amount of back-story here is great. There is so much put into the mythology that you could do a series on it.

That will move me to the pacing. I’m not going to lie; I’ve seen this so many times I thought it was longer. I was shocked to see that it runs 92 minutes. It was through these most recent viewings I realized there isn’t much filler. We get introduced to our main couple and their tragedy happens quickly. The new family then moves in and it shows Adam and Barbara not only trying to get a hang on being dead, but what to do with them. There’s good comedy here, which hurts the overall tension, but it does add to the enjoyment for sure. This isn’t meant to be a heavy movie outside of our couple dying and trying to adjust. The ending is cute and works for the overall feel the movie is going for.

Which takes me to the acting for this film. It is good across the board. Baldwin and Davis work so well together. They’re on similar wave lengths and they seem like a loving couple. It’s interesting to see in life they don’t play by the norms and it is fitting for them in death as well. Keaton is great in this role. It is iconic and he adds his own quirkiness to the role. He steals the show for sure. O’Hara is great as the pretentious art person from New York as well as Shadix. I went through a phase that was like Ryder and I think she does a good job in her performance. Jones and the rest of the cast work well together to round out this movie as well.

As for the effects, I’m surprised to see how well they still hold up from the late 80’s. Everything I’m assuming was done practically and it shows. The snake version of Betelgeuse is creepy and we get that Tim Burton feel as he incorporates German Expressionism into real life. The office in the afterlife is great and feels like a distorted version of ones I’ve worked in. I think the look that Adam and Barbara take on when they think they’re going to scare the family out as well. It is also shot very well and no complaints there. We get good cinematography for sure.

The last thing to cover would be the soundtrack. Danny Elfman was in charge and he killed this one. It is funny is that a podcast I listen to used the theme song from the credits as their opening for a stretch. I never put it together. Shout out to the Podcast Under the Stairs and Duncan. Getting back to this, Elfman mixes the creepy vibe into it and it fits for what we are seeing for sure. I revisit songs from this film regularly while I’m writing.

In conclusion, this is a film that I have a lot of nostalgia for, but after these last viewings I see there’s a lot of depth I didn’t notice. I think this has a great idea of clashing lifestyles with these two different families and seeing if they can co-exist despite it. It is interesting concept of the afterlife not being too different from what we live in now. It doesn’t waste any time getting into this and the running time flies by. The acting is good across the board. There’s not a lot in the way of effects, but what we get is practical and there’s a lot in just the aesthetic to the movie. The soundtrack is also good. It fits the atmosphere they’re building. I think this is a solid gateway film that you can watch to introduce kids into the genre. There are things that will go over their head and adults can enjoy for sure. It is also lighter on the horror elements while still having them. I highly recommend giving this a viewing for sure.