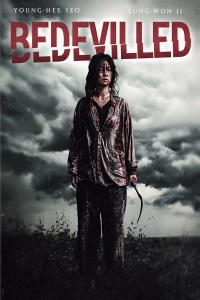 This is a movie that I had heard about thanks to podcasts, but I didn’t necessarily know a lot about. When this movie appeared on the list for the Podcast Under the Stairs’ Summer Challenge series for the 2010s, I was intrigued to check it out. Aside from that, I came in pretty blind, just knowing the title to be honest. The synopsis here is a woman subject to mental, physical and sexual abuse on a remote island seeks a way out.

For this movie, we start in the city of Seoul. The initial scene is at night where a woman is being attacked by a couple of guys. Someone in a car ignores them while they’re begging for help.

We then meet Hae-won (Seong-won Ji) as she works at what I’m assuming is either a bank or a company that loans money. This actually feels a lot like the beginning of Drag Me to Hell, but instead of the company’s policy not to loan money to a high risk customer and make the tough decision, we get the introduction that Hae-won is pretty heartless. I used that example as there is an old woman asking for a loan as she overextended herself moving into a new apartment. Hae-won refuses help. She is called to the police station to identify some men. She thinks it is them, but she can’t be sure. She also refuses to make a statement and wants to be left alone. There is then an incident at work where she strikes a co-worker, thinking they locked her in a stall in the bathroom. Her boss is upset with her and asks her to take a vacation.

She decides to go to Moo Do Island. We learn from an interaction with the man driving the boat that her grandfather lived there and she used to visit. When she arrives, a friend she made on the island is excited to see her. Her name is Kim Bok-nam (Yeong-hie Seo). She has lived on this island her whole life. Those that live there with her aren’t as excited to see her. They don’t know why she is there visiting as there isn’t really much to the island. It is a bunch of farmers, working day in and day out. They live hard lives.

We really get to see this as well. Bok-nam is married to Man-jong (Jeong-hak Park) who is a hard man. There doesn’t seem to be much love between them. Bok-nam has a daughter of Yeon-hee (Ji-eun Lee). It appears that Man-jong isn’t the father, but he has taken her in as his own. Man-jong also hangs out with his brother, Cheol-jong (Sung-woo Bae) who spends most of the day eating these leaves that give you a high.

After the not so warm reception, we see this isolated island is a nightmare existence for Bok-nam. She is seen having sex with Cheol-jong while Man-jong is fishing with Yeon-hee. At first I thought they were having an affair, but the more things go on, the more I’m thinking it isn’t consensual. Mang-jong is abusive toward Bok-nam and even cheats with a prostitute that visits the island while she sits outside their house. She is belittled by his mother while this is happening, to add insult to injury. Bok-nam sees a possible way out with Hae-won coming to the island, but things take a dark turn that push this defeated woman to the edge.

That is where I’m going to leave my recap as this movie doesn’t have the deepest story, but it is still carrying a powerful message here. Where I want to start is that I think it is interesting that we start this movie meeting Hae-won. I assumed she was going to be the main character. The purpose we meet her first is important to where everything ends up. I found it interesting that in the beginning of the movie, we see her dressed in white as opposed to where she ends up in all black. It seems to be a visual representation of the change within her.

I want to delve a bit more into the character of Hae-won. She is calloused when we meet her. I don’t necessarily know why. From what we are given, I think she is spoiled. She got to go to Moo Do Island for a vacation where Bok-nam has lived there her whole life. I don’t actually think she’s ever left to be honest. Hae-won has better opportunities and for whatever reason, she doesn’t want to be bothered by anyone. She could help a father put away some bad men, but she refuses as she thinks it could hurt her life. She doesn’t want to help the old lady and thinks her co-worker was messing with her. There is more of this on the island when she sees things going on with Bok-nam and her family. She can help, but she turns a blind eye to do her own thing. There is even more heartbreaking reveal at the end as well with something we saw early into the movie.

Now that I’ve fleshed out my thoughts on Hae-won, I want to move over to Bok-nam. She has tan skin like everyone else on this island. This is because she has to work in the fields. From what I gather, women in South Korea actually want to have white skin like Hae-won. Bok-nam has had a horrible existence as well. She has grown up in a world of abuse and despite there being nothing on this island aside from her daughter, she cannot escape it. This is extremely bleak and made me feel horrible. As I’ve said previously, she did see a chance at escape through Hae-won. This is really the straw that breaks the camels back when even she ignores her. I feel that Bok-nam is justified in what she does when she finally snaps.

The last part of the story I want to go into would be the island itself. This is interesting to see a movie that feels like a Korean take on hixplotiation. This island is isolated. You can only get there by boat. They cover for each other as they’re all pretty much family. Bok-nam has no chance here as she is considered to be the black sheep. This makes it even more depressing when she tries to share her side of the story and no one believes her. I think what makes this feel more real is that I believe things like this could happen and it is sad.

To make this work though, you need good acting. I was impressed with Seo in her role as Bok-nam. She has such hope when Hae-won arrives and she seeing her destroyed right and left makes it heartbreaking. It works though when she has had enough and snaps. I think that Ji does well in her performance. There isn’t a lot of growth there, but she seeing where she starts and ends up makes sense. It was fitting. Lee was cute as Yeon-hee. I’d say that everyone on the island fit for what was needed. They make me hate pretty much everyone and I can see people that I know in this group which makes it even more real for me.

Then really the last thing to go into would be the effects. The Koreans do pretty well when they make brutal films and I’m glad that I’ve delved a bit more into these revenge themed ones. They don’t go over the top which is good. The blood and gore that we get looks real. They went practical which really helps there. I don’t have any issues here. The movie also has some solid cinematography which also helps with the effects with framing.

So I think that is about the extent of what I wanted to go into in regards to this movie. In conclusion here, this is an interesting take on the revenge film that works for me. It is so depressing to see what happens to Bok-nam and what she is driven to do. The acting really helps here. The concept and story isn’t that complex, but it also doesn’t need to be. Effects were done practical from what I could tell and looked good. The movie is shot well. The soundtrack didn’t necessarily stand out, but it also didn’t need to. I would say that this is a good movie. I can’t recommend this to everyone with how brutal it gets. I’ve seen worse, but just want you to keep that in mind. This is also subtitled as it is a foreign film. If either of those are issues, I would avoid this one then.