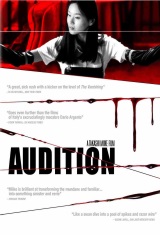 This was a film that I checked out when I decided to go through Fangoria’s 300th issue where they gave their top 300 horror films of all time. This was a film that I knew about before I had seen. I’ll admit the first time I saw this, I didn’t fully comprehend what I watched. This last viewing was my third time with it and it was in a theater on a 35 mm print. To get into this, a widower takes an offer to screen girls at a special audition, arranged for him by a friend to find a new wife. The one he fancies is not who she appears to be after all.

To kick this off, we have Shigeharu Aoyama (Ryo Ishibashi). We get an almost montage that his wife is dying and their son is on his way with something he made to try to cheer her up. Before the son can arrive, the wife passes away. The film then shifts 7 years into the future and we see that Aoyama never remarried. His son is Shigehiko (Tetsu Sawaki) and it’s just been those two. Shigehiko wants his father to be happy and remarry.

We then go to a quite misogynistic scene between Aoyama and his friend Yasuhira Yoshikawa (Jun Kunimura). Yasuhira works in the film industry. Aoyama tells his plan to remarry, but he wants to observe someone before they do. It is then decided that Yasuhira will take a script that Aoyama submitted, rework the story and audition for it. The real purpose though is for Aoyama to screen candidates for his potential next wife.

Aoyama takes home a ton of applications and has to narrow it down to 30. There is one that catches his eye and he seems to have decided on her before they even start the interviews. After that though, it is sealed. There isn’t something quite right about her and Yasuhisa tries to tell him. Aoyama doesn’t heed his warning and we learn the truth of Asami Yamazaki (Eihi Shiina). It takes quite the turn when none of the information she provided adds up and Aoyama goes looking for her. She has a dark and disturbing past to make her the woman she is today.

I have to say that this film really isn’t that scary, but it definitely is disturbing. This film plays the fact that Aoyama is lonely. After his wife died, he focused on giving the best life for his son. He wants to find a woman who is similar to his former love, so they both make each other happy. The problem ends up being in the way that he goes about it. He deserves to be punished, but not to the extent that he does.

On the flip side of this, Asami is also insane. This film is really all about being lonely and we see that they’re both screwed up in different ways. Aoyama’s  have already outlined. Asami grew up with heartbreak that her ballet career came to an end early and there is abuse there as well. She is looking for love herself, but how she tries to get it is crazy.

My biggest issue with this film is that you don’t really know it is a horror film until those final 30 minutes. The rest of the film does feel almost like a bad romance, except after this last viewing, there is a sense of impending doom. I do think that feeling of tension that builds throughout was pretty good and I will admit, it did get my anxiety going.

Going from this point, I do think the film is a bit long. There are some things I think that could be trimmed to tighten up the story. I do know that the director, Takashi Miike, is known for things that he puts into his films and disturbing imaginary. We get both of that and this film is also based off a novel by Ryû Murakami. I think that could explain the length as well. As I stated above though, the last 30 minutes is intense and I love the ending.

I will say that the acting is really good in this film. Ishibashi I thought played his role great. He seems like a man who is successful in life, but is lonely. He does do everything right as a widower. The problem is that he falls for someone he doesn’t know enough about, which definitely happens. Shiina I thought was also great. She is shy in a way that is cute, but I love the reveal of her character. It definitely makes sense when we see the things she went through to become the person she is. Sawaki was solid as the son. I also thought Kunimura was solid as the friend. He comes off as enough scumbag who works in the movie industry and it is perfect for the role. I also needed to give credit to Renji Ishibashi, his role is quite creepy as well. The rest of the cast rounded out the film for what they needed.

This brings me next to the effects of the film. I thought they were well done, even though there aren’t a lot of them. They were a couple scenes that spooked me the first time and the climax is intense. I’m glad it was done this way in an era of bad CGI. The film was also shot beautifully, which I come to expect from all of the Miike films I’ve seen.

I would recommend giving this film a viewing. I will warn you that this is from Japan. The version I watched was in Japanese with English subtitles. I do believe there is a dubbed soundtrack for those that need it in English. I think that the acting for this is really good, the story is as well and the ending is great. It has a very surreal feel that make you question what is going on. This film definitely plays on something that many people go through and that makes it that much scarier. I do think the pacing is a bit slow and could be trimmed to tighten up, but the more I see this film, the higher my rating comes to for it. This film is definitely worth giving a chance to if you haven’t seen it. I find this to be a good film.