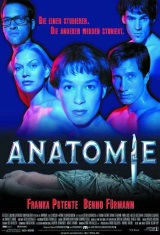 This film begins with showing a body. Someone is running a scalpel along it, but not cutting it. We then cut to the head, where the eyes open. The man is being cut open and dissected, but he is still alive. He looks down at his left hand to find that all of the skin has been removed. He can move only one of his fingers while in this state.

We then cut to a young woman as she figuring out what her final grade is for her class, she is played by Franka Potente. She learns that she has passed and that she has received the second highest grade on a nationwide test. She learns that she is going to Heidelberg for their summer program. This film takes place in Germany and this is a great honor. As she is leaving, she bumps into another woman, played by Anna Loos.

Potente’s grandfather is dying and he taught at Heidelberg back in his day. He is very proud of her and wants her to be his ‘heir’ to what he did; the grandfather is played by Werner Dissel. She also works in her father’s clinic. Her father is also a doctor, but he did not set his sights as high, he is played by Rüdiger Vogler. He doesn’t want her to go to Heidelberg, but will allow her to. Potente speaks her frustrations about her father to her mother, played by Barbara M. Ahren. She doesn’t comment much on it, but listens to her.

Potente then gets on a train for Heidelberg. She runs into Loos, who also got accepted in the same program. They are both from Munich, but have never met. Loos is quite interested in the males though. While on this train, a man is seizing on the ground. He stops breathing and Potente helps save him. He is played by Arndt Schwering-Shonrey. We learn that he has an enlarged heart, so this happens to him quite a bit. He is a good-natured young man.

At the school, Potente and Loos are given an apartment together. They meet a student who is arrogant, played by Holger Speckhahn. He takes a liking to Loos immediately, but ignores Potente. Potente and Loos are told after they get to their room that they have a meeting in the lab. They run into another student, played by Antonia Cäcilia Holfelder. Once there, a body on a table is moving. Everyone freaks out, but Potente stays calm and figures out that is a prank, in which Speckhahn is a part of.

The class is led by a tough professor played by Traugott Buhre, he gives the rules and tells them what is expected of them. Afterward, the whole class goes out for drinks. Some people of note are Sebastian Blomberg, who has a crush on Potente and claims he is a butcher, not a med student. There is also Benno Fürmann, who is from Heidelberg and Blomberg’s roommate, Olive Wnuk.

Also at this bar is Schwering-Sohnrey. He is awaiting this specialist. When this doctor doesn’t show, Schwering-Sohnrey goes into the bathroom and he is drugged. He wakes up much like the other guy on the table. When he does though, he fights back. He cuts one of the individuals that are doing this across the chest. He is killed before he can get away though.

The next morning Potente freaks out when she sees Schwering-Sohnrey on the slab. She tries to investigate more into what happened to him. Buhre tells her not to worry about it and blames it on her being a woman. She involves a lab tech friend from back home to help her. Loos meanwhile has taken a liking to Fürmann. Blomberg is also trying to impress Potente.

During her investigation, Potente discovers a secret society of Anti-Hippocrates. We learn that this dates back a long time and it is similar to the Freemasons. This group though is out to do illegal medical research for the bettering of science. Everyone keeps telling Potente that she is crazy, but it seems that there are two in the school who are part of this organization.

Potente begins to get too close when she finds blood in her bed and a candle underneath it. This is a warning they give to traitors.  Fürmann comes to her room looking for Loos, who has moved on to Speckhahn. Blomberg earlier in the day stated that he had some information about this organization she is looking into. He shows up and Fürmann gets the hint to leave. Both men do, but before Fürmann does, he reveals he has a long cut on his chest.

Is Fürmann part of this secret society? Who are the two doctors who are creating the exhibits? Is the secret society really there or is it part of Potente’s imagination? How far does all of this go?

I have to say that I really like this film’s story and concept. There are a lot of films like this out there with a secret society, but it usually gets revealed to us by someone joining it. This one is different. We get that there is a society, but we only see that there are two people in it and someone stumbles upon the information. The more they pry, the more they discover though. I also really like the history that is given to this group. I’m not sure how much of it is real or true, but I do like that they are stating that they are very old, but that they had a re-insurgent during the Nazi’s time. We know they did a lot of weird medical experiments, but they also did discover some things as well. I think the acting for the most part is good. The action is as well. I think the actual story of the film is lacking just a bit, because I’m not sure how much of this could actually happen and gotten away with for this long. Not a huge issue, but still something I question.

I already have stated that I have an issue with the realism of this film. I haven’t looked into seeing this drug they used would really do what it did. I also do not know if some of things that happen in this film would be able to go on as long as the film states that they have been either. I do have an issue that students turn up missing and no one really makes a fuss about it. I can see those that are in the society not making a big deal, as they are in on what is going on. The police really don’t seem to think its odd when students are disappearing though either. There is also a point where some members of the society are going to turn in a member, which I do not believe would happen. It could be realistic, but I feel this would be something that would be handled more internally, especially since they are not supposed to exist. I feel that exposing themselves is a much bigger issue. With that said though, I do like that they are sucking up to big pharmaceutical companies, showing that money can turn anyone away from their morals.

All in all, I would recommend giving this one a viewing. Now I need to point out that this film is from Germany, so you either have to watch it in subtitles as the characters speak German or the copy I have has the voices dubbed over. I personally find it annoying when they are dubbed, because I catch myself watching their mouths and the words do not sync up. If you can handle this, then you will get a nice horror/thriller that deals with cadavers and medical research. The acting isn’t bad, the story is a lacking a little, but the concept is solid. If this sounds good, then give it a chance, I do not think you will regret it.