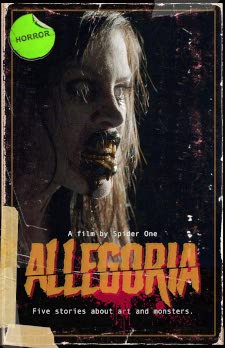 This is a movie that I didn’t know anything about until I saw it on Shudder. It was under their original/exclusives. I added it to my list due to the poster since it creeped me out. On top of that, I saw that it only ran over an hour. I decided to make this my 2022 film for the week since it is a bit busier with my feature as well.

Synopsis: a group of artists’ lives become unwittingly entangled as their obsessions and insecurities manifest monsters, demons and death.

We get an anthology of sorts with five stories. It starts with seeing Robert Anderson Wright (John Ennis). He’s looking in a mirror, getting himself prepped. He’s teaching an acting class. We learn that that it is a small group that are accepted so there are only 5 students. One of them is Brody (Krsy Fox). Robert sees something in her and calls her on stage. It has a turn when he belittles her, but he doesn’t get the response he was expecting.

The next one is a painter of Marcus Muller (Bryce Johnson). He’s struggling to finish his painting and it doesn’t help that his agent, Benny (Johnny Hawkes), keeps bothering him. This also gives us the first thread that all these are connected. Marcus is seeing Brody. She also calls him, but he is short with her. He has more pressing things when he’s visited by an entity.

It then shifts to Eddie Park (Edward Hong) who is writing a screenplay about a killer named The Whistler, who might be more real than he imagined. There is also John (Adam Busch) who goes on a date with Ivy (Scout Taylor-Compton). She seems a bit wild for him and it is awkward. There is much more in store for both. The last story shows us Hope (Josephine Chang) who lives with Brody. The former goes to band practice where one of her mates talks of a grouping of notes that can drive someone insane. He just hasn’t discovered the order yet.

That’s where I’m going to leave my recap. I think that gives you an idea of the stories we are getting here and introduces the major players without going into spoilers. Now since this is an anthology, let me break down the set up with that. This is done by the same team so it flows that way. It looks like the musician Spider One wrote and directed this. I knew him as the lead singer of the band Powerman 5000. What I didn’t know until settling in is that he’s the younger brother of Rob Zombie. With that set up, I like how all these stories are connected to others in subtle ways. That is something that I’m a fan of when it can be done in an anthology.

To continue to delve more into this, we also have the idea of connected tissue of artists in the all the stories. This can include an actress with Brody, a painter in Marcus, a writer with Eddie, a sculptor in Ivy and a musician with Hope. They are the main characters of each story. Some of them are also connected in other ways. Brody is dating Marcus. Brody and Hope are watching a movie that Eddie wrote. Ivy is Marcus’ ex-girlfriend. I should also point out that Brody and Hope are roommates. Seeing little things in each of the stories helped keep my interest. It also helps to show when each story is taking place regarding others. This isn’t linear and we jump before as well as after some things.

With using artists as the leads in each of the stories, we delve into the insecurities as the synopsis said. Brody questions if she is good enough for the class she was accepted into. Marcus is arrogant and thinks what he’s doing is more important than Brody, but there is this lingering thing that what he’s doing isn’t good. He doesn’t want to sell out. Eddie is hard on himself and inside thinks what he’s writing has holes. Ivy is a bit different from the rest, but I like what they do with her. Hope is also interesting, as hers is wanting to discover what the guitarist in the group claims. I like that there is something under the surface and we are seeing manifestations of them as well.

Now I do want to shift over a negative though. Seeing the short runtime, I was excited. I think that it becomes a problem now that I’ve seen this. There are too many shorts and it eats up the time. What I mean is that when we get to the best part of each, it cuts away. In doing that, I think it pulls its punches as I want more. When we see Brody in class, I want to see the aftermath. Same with Marcus. What I will say though is that I think Eddie’s, Ivy’s and Hope’s stories work as they should. I almost think that some of them should be moved around to allow the ones that cut short to be fleshed out a bit more. Without spoiling, I do think that Hope’s needs to stay later for story reasons. Just an issue I had with how things are presented.

That’s about what the extent of what I needed to say for the story so I’ll go to the acting. Ennis is good in his role as Robert who is our acting teacher. I liked what they do with Fox’s character of Brody. I enjoy how she fits into everything. Johnson is solid as the arrogant painter Marcus. Hong fit his role as Eddy. I’m not sure why the Internet Movie Database isn’t acknowledging Taylor-Compton as Ivy, but she has a seductive nature about her that worked. Busch plays this awkward guy opposite her well. Other than that, I thought that Chang was good along with her bandmates. Special credit to Tyrone Oliver, Adam Marcinowski and Matt McJunkins who played different ‘monsters’ in the movie as well. Oliver and McJunkins play actual ones where Marcinowski’s size makes him work. He also brings character to the role. The acting in general was fine.

Then the last things to go into would be with the filmmaking. I’d say that this was shot well. The cinematography was well done and I had no issues there. At times, it feels like we are getting filmed stage plays with the use of lighting and shadows. That was interesting. There is some interesting things with the effects as well. There is a Paint Monster that was terrifying. We get good practical stuff there as well as with a possessed person and an entity known as The Something. All that was well done in my opinion and I had no issues here. Other than that, I thought that the soundtrack fit for what was needed. It shines in the last story as Hope tries to find the right order of the notes. The song that she sings is cheesy and it made me laugh. The sound design adds elements as well.

In conclusion, I think that this is a decent anthology. I like that this is done by one team so it flows seamless. There is also a bit more underneath that you can appreciate or just watch it on surface level which is creepy. Using the idea of artists was interesting. My problem though is that we have too many stories without fleshing a couple of them out properly. That made it feel like it was pulling its punches. Still worth a watch at least once in my opinion though.