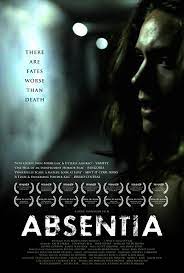 This was a movie that I learned about thanks to podcasts. I had seen Hush as well as Oculus so I was familiar with writer/director Mike Flanagan when I learned of this movie here. This went on a list of movies to see but hadn’t gotten around to it. That was until the Podcast Under the Stairs as this movie was on the 2011 list for the Summer Challenge Series. The synopsis is a woman and her sister begins to link a mysterious tunnel a series of disappearances, including that of her own husband.

For this movie, we are in the apartment of Tricia (Courtney Bell). She is something like 7 months pregnant. She is struggling though as her husband has been missing for seven years. She is in the process of having him declared ‘dead in absentia’. To help, her sister of Callie (Katie Parker) shows up. She wants her to move to a new apartment as part of the process. Tricia knows that she must, but it isn’t easy. She is still going around putting up lost fliers for Daniel (Morgan Peter Brown) and taking down the old ones.

To complicate matters, a Detective Mallory (Dave Levine) comes around. He reminds Tricia about the importance of locking her doors due to the neighborhood. There is a series of break-ins. We also get a bit here that Tricia and this detective have more history. He does bring by the necessary paperwork to file that is needed in declaring Daniel deceased.

Things take a turn when Callie goes for a run. She goes through a tunnel and when she makes the return trip, she finds a man lying in the tunnel. He looks rough and he asks for help. He states his name is Walter (Doug Jones). Callie tells him she doesn’t have anything to give to him but does bring food out later.

Callie is shocked one day to find a pile of items on her doorstep. She can’t accept what is left, so she goes to the tunnel to return them. While she does this, Jamie (James Flanagan) tells her it isn’t a good idea. He drops off a garbage bag. She gets spooked even more when she goes to bed and finds everything she left on her pillow and under the blanket.

That’s not where it ends there. Daniel shows back up, right when Tricia was trying to move on. This complicates her life once again, but there is more to this. Daniel isn’t showing the classic signs of living on the street for seven years and he believes there is something after him. Callie has a history herself. It then becomes, is there something after them or a more logical explanation?

I feel that is enough to get you up to speed with this movie without ruining anything. This is an interesting film that I’m finally glad to tick off the list. I like this idea that we are getting presented with here. You can see the early stages of Flanagan as a filmmaker here as well. He is great at giving us something that will come back to be referenced later. For an example, Callie shows up with gifts for Tricia’s baby. One of which is a book of ‘Three Billy Goats Gruff’. This story has parallels there and it looks like this is considered to be an update to that. I would say that is loosely, but also makes sense. There are also the missing posters for both humans and animals that also tie back into all of this as well that I thought enhances the story.

Where I think I should take this next would be breaking down the two sisters. First I’ll start with Callie. We learn that the last time she saw Daniel, she was quite young. He believed in her though. She lived a rough life from there. We get the idea that she had a drug problem and ran away with a guy. She is clean now and trying to get back on track. Part of that is coming to help her sister. There is something up with her though that makes her unreliable. I find it interesting that we see what she believes happens at different times while also getting to see later on what others believe really happened. It adds a layer of duality along with an unreliable narrator.

Then we have her sister. What I found interesting is how far long she is being pregnant. I can’t blame her though. Her husband has been missing, without a trace for 7 years. She is stuck waiting for him while also doing things for herself. What is sad there though is that Det. Mallory is also holding out hope, so she is somewhat stringing him along. It is strategic for this movie to have Daniel show back up right when she is finally done as it makes it that much more emotionally impactful.

For the last aspect of the story to delve a bit deeper in are the two ways to look at this story. There is the supernatural angle that people are disappearing with this tunnel. I love the back-story that Callie finds that as far back as they’ve been keeping track, this place has a high disappearance rate. We could actually have this entity that is bug like. The other way to look at it is that Callie is getting higher so she thinks these things are happening. It is something else strategic that people who go through withdraws tend to think things are crawling on them. It adds to that element of not believing her.

Now I think I’ll take us to the acting. I thought that Parker does a good job as Callie. She brings some snark to the role that I liked. It is also heart warming that she is trying to get her life back on track by helping her sister who is doing the same for other reasons. I did find it interesting that she is a Christian and doing an act of kindness makes her a target here. Bell is solid as her sister. What works best for her performance is how sad what she is going through. Not knowing for as long as she had would be tough. Levine and Justin Gordon aren’t great, but are solid enough as the detectives who are assigned to this case. I thought Brown was good as Daniel. I liked to see a cameo here by Jones as well. The rest of the cast rounded this out for what was needed for me.

Then really the last thing that I want to go into would be the cinematography and the effects. For the former, you can see Flanagan in his early stages of directing. There are some interesting shots here, especially with the tunnel. I like how he frames things with shadows that make it creepier. It was also a good touch to show us both sides to things that happen so we don’t necessarily know who to believe. The effects here are solid for the most part. We don’t get a lot of them. It looks like there wasn’t a lot of budget as the CGI we get isn’t great. I’ve definitely seen worse though so there is that.

So then in conclusion here, I’m finally glad I could tick this off my list. This is an interesting, early Flanagan movie here. Updating the concept of ‘Three Billy Goats Gruff’ with a different take on it was good. I like the back-story that is discovered for this area and how things play out there. The acting is good across the board. This is shot very well and even though I have a slight issue with the effects, it isn’t enough to ruin anything. Aside from that the soundtrack fit for what was needed for me. I’d say this is an above average movie. I wouldn’t be surprised if this goes up now with another viewing.