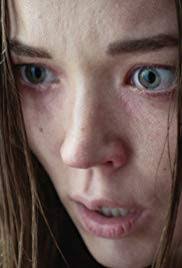 This was another film that I had no idea what it is about and came in pretty blind to check it out at the Nightmares Film Festival. I did actually watch it with one of the actors in attendance, Clayton Hoff, who gave some interesting insight into this one after it ended. This was actually the Midwest premiere of it as well. The synopsis I have is after leaving behind a painful past to follow her dreams, Sarah (Nicole Brydon Bloom) scores the perfect Hollywood apartment. Something isn’t quite right when she can’t sleep and is receiving threatening notes.

We start getting a tour of a courtyard in an apartment complex. Everyone there seems to be quite happy. It then follows Sarah. She is working a temp job where she befriends a coworker sitting behind her, Lisa (Celeste Sully). Sarah is quite timid and can’t say no. She is staying a motel and is trying to find permanent residence.

This brings her to an open house where she meets Brian (Giles Matthey). He is a good looking guy who lives here and he hits it off with Sarah. She then goes to the apartment and meets the manager of the property, Jerry (Taylor Nichols). She fills out an application and we get an interesting interaction as she didn’t answer all of the questions to the full truth.

She still gets the new apartment and moves things in. There’s a real sense of community and Brian helps to introduce her to the others. There’s Janice (Naomi Grossman) who’s the wife to Jerry. There’s also Lester (Hoff), Ester (Earnestine Phillips) and Miss Stanhope (Susan Davis) to just name a few. The problem though is that she lied. She has a cat and isn’t supposed to have pets. On top of that, we learn there was fallout between her and her father, Gus (Alan Blumenfeld). He wants her to come home, but she can’t forgive him and wants to start a new life her way.

The problem is that this dream place, might actually be a nightmare. It starts that she can’t sleep with the weird noises and then threatening notes about not following the rules of the lease. What is really going on in this apartment complex?

Now if you’ve read other reviews I’ve done, you know that my ideal way to go into a movie is to not really know anything and just experience what it is trying to tell me. That’s what I did with this one and ended up really digging the vibe that this one had. There are actually some really scary concepts here that this one explores.

The first is that Sarah is here in Hollywood to try to make it as a costume designer. The problem is that she is from the east coast, so she doesn’t have anyone there as support. She also comes off a bit naïve and is struggling to stand up for herself. These are all bad things to have though when you’re trying to make a new life across the country like she and you’re looking for friends/community.

There’s also a really creepy vibe about this apartment complex. I think that the movie does a really good job in establishing that this place seems to be perfect and that there could be something up with some of the residents. The obvious one is Lester. Sarah thinks he’s creepy, but Miss Stanhope sets the record straight and actually makes Sarah feel bad in the process.

I don’t really want to spoil this film, especially since the Internet Movie Database doesn’t have a synopsis yet and I think that this should be experienced. There are some things that are revealed about this community. It really starts with a book that Lester tries to get to her and the more you learn the crazier things get. It also has an aspect that really fascinates as well as scares me, which at the end is even more terrifying when you see how far this really goes.

From here I want to shift to covering the pacing of this one. It comes in at 90 minutes and I think that’s a good length. I like the opening images we get, establishing things before it gets turned on its ear. The problem though is there’s a section in the second act that I did find myself just a bit bored. I think that it really hard to make what is happening exciting, as it is pretty traumatic. I just don’t buy that they think there’s been a change come over her that quickly to trust her like they do. The ending though was on point and I love the implications there for sure. It actually reminds me of a film from a couple years ago, but I don’t want to spoil the ending for either.

As for the acting, I thought that it was pretty solid. Bloom is a good lead. She really gets across the naivety that the role needed. We also get to see her grow as bad things happen to her. The only issue I have there is that I don’t know if she conveys enough for her to be given some of the positions that she is that early. Nichols, Matthey and the rest of the community members really establish one side of them until it reveals the truth, which I definitely thought worked. Blumenfeld adds an interesting dynamic here and helping Sarah grow. I’d say the rest of the cast also round this out for what was needed.

Something that I noticed about this one is that there’s not a lot in the way of effects. It isn’t necessarily a film that needs it though either. We do get some practical effects on some of the things, like when a character is tortured. There’s another scene where someone gets shot that also looked pretty real to me. I think that they definitely did well for when they needed them and it was also shot very well, so that’s plus.

The last thing to cover would be the sound design. The soundtrack didn’t really stand out to me, but it did fit for what was needed. What I really want to talk about is the noises that Sarah is hearing at night. I loved what it turns out to be, but we get a few nights of seeing this and knowing that she’s kind of losing it. This in turn makes sense when we learn what is happening.

Now with that said, I really ended up enjoying this one. It definitely has a concept that really creeps me out, but I love how they brought this subtly to the urban setting. I really like how they constructed Sarah’s character and we really get to know her as well as she her grow. I do think there’s a section that was a bit boring, but I see why it is required. The acting I thought was pretty solid across the board. There’s not a lot in the way of effects, but we do get what was needed. The sound design is really creepy and helping with tension while the soundtrack fit for what was needed. I thought this was a good movie and would actually recommend this to genre and non-genre fans alike. It really has a socially relevant commentary which if you know me, I’m a big fan of.