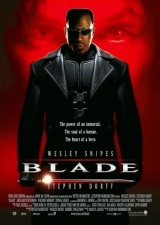 This film begins in 1967. There is a woman brought into the emergency room. She is played by Sanaa Lathan. We hear a doctor say that she is has been bit by something and is losing a lot of blood. She then goes into labor and her baby is saved by C-section. The only image the baby sees of her is her hand out for him.

We then shift to present today. A woman played by Traci Lords is taking a guy to a party; he is played by Kenny Johnson. She takes him to a butcher warehouse. There is a point where Johnson thinks he sees a human in a bag, but isn’t sure. He is then taken into a rave party inside of it. Everyone is rude to Johnson and don’t give him the time of day. At this party we see Stephen Dorff, Arly Jover and Donal Logue. Johnson finds a drop of blood on his hand and then it starts to rain on everyone at the rave. They are vampires.

The party is stopped though when the main character, Blade arrives. He is played by Wesley Snipes. There is a panic at the sight of him and we hear that he is called ‘Daywalker’. Snipes kills many of the vampires, including Lords. He fights with Logue and pins him to the wall. He then sets him on fire when the police arrive. Snipes escapes.

Logue’s body is taken to the hospital where a doctor is working, played by Tim Guinee. He sends some of the blood to another doctor, played by N’Bushe Wright. We soon learn that they used to date and there is not so good history between them. She thinks he is playing a game with her. The blood that was sent is alive, but it was from a corpse.

They go to check on it and Logue comes back to life. He bites Guinee and then attacks Wright. He bites her as well, but he is stopped by Snipes. They fight until the police arrive. Snipes is going to leave Wright, but she reminds him too much of his mother. He escapes with her.

Snipes is a vampire, but he can walk in the daylight. He has all of their strengths, but the only weakness is his thirst, which he keeps in check with a serum. He shares this base with Kris Kristofferson. Later we learn that he saved him as a kid and that Kristofferson’s family was killed by vampires. They help Wright, but are going to drop her back off. Kristofferson is intrigued though that she is a hematologist.

Dorff is called in to meet the vampire elders. Dorff is not a pure blood and was turned, so he is looked down on. The leader of the vampires is played by Udo Kier and he scolds Dorff. They feel he is too loud and draws attention to vampires. We learn that they work with politicians, but Dorff knows they are the master race and wants to take over the world.

He is researching a prophecy of a blood god called La Magra. Kier scolds him that he is wasting his time. The vampire bible that he is pulling it from is written in a dead language, but he has a computer converting it. Dorff believes that he will find the answer despite what he is told.

Snipes uses a cop that is working for Dorff to track what he is doing. He uses Wright as bait to draw him out. Wright begins to notice vampires and those that work with them all around her. Snipes follows the cop to a club that is above the records. They run into a huge vampire, played by Eric Edwards, that is helping Dorff with the translation.

I will admit that coming in to see this film for the first time; I did not realize that this was based off a Marvel Comics. After learning this information the film does make a lot more sense. One thing I will give this one is that it is rated R, something rare for a film based off a comic. I like the storyline and what Dorff is trying to do. I also like the back-story of the vampires and how they could exist in our world. I think the acting is good across the board and there are actually some solid actors in minor roles. The action is good and there is a lot of fighting.

Now the first issue I do have Kier tells Dorff that the language of the vampires is no longer used and no one can translate it. I don’t have issues with the computer having all of the information being able to decipher it. I do have an issue with Kristofferson taking a piece of the scroll and being able to read it. If Kristofferson could, how come an ancient vampire like Kier could not? I also think it is creative for Dorff to go out into the sun wearing a motorcycle helmet that has visor that stops UV rays, but would sunscreen really protect him and prevent him from dying? I also don’t like that Dorff changes into the blood god and then dies almost immediately. This is something I have with a lot of films that build up to something that is ‘unstoppable’ and then they kill it off minutes later.

With that said, this is a solid vampire film. This one has quite a bit of action. The story and mythology I found to be good. The acting is solid across the board. If you were a fan of the comic series, I would recommend giving this one a viewing. I personally do not know much about them, but I do like this film. It is not overly scary, but still is good and if you like vampire films then I think you’ll enjoy this one.