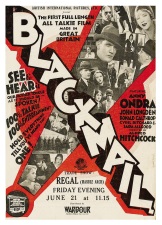 This film begins with what feels to be a chase. It takes place back in the 1920s and we see an old truck with a canvas tarp over the back. There are men with a telegraph machine and they are sending a message about the person they are chasing.

We then shift back the events that led us there. We get a few detectives arresting a man in his room. The main one is John Longden. He goes to leave work and is being waited for by his girlfriend, Anny Ondra who is dubbed over by Joan Barry. They go to dinner at a busy place and we see that Longden is impatient. He is told to go upstairs and instead sneaks past the kid at the door. He chases down a waitress to put in their order. Ondra doesn’t seem too interested to be with him. Longden wants to go to the movies, but she doesn’t. She then changes her mind to want to go. She has a note in her purse though from a man that is going to be at this restaurant. When he arrives, she changes her mind to not wanting to go. This other man is played by Cyril Ritchard. Longden gets angry, calls for the bill, leaves money and then storms out. Before he does, Ondra states she will go to the movies yet he still leaves.

Longden goes outside and then debates if he should go back in or not. He then sees Ondra leave with Ritchard. Longden follows them.

Ritchard is an artist and he takes Ondra to his house. He sweet talks her to come see his ‘studio’, which is just his apartment. Ritchard checks the mail and then asks the landlady, played by Hannah Jones, about a man that came to see him. Jones doesn’t see Ondra. The couple then goes up to his room.

Ondra sees a painting of a jester laughing and pointing. She thinks it is really good. Ritchard plays the piano for Ondra, he gives her an art lesson and makes her a stiff drink. She sees a dress that she likes and he convinces her to put it on. Ritchard starts to prepare her to pose for him, but then kisses her. She breaks away and then goes to dress back into her clothes. Before she can, he takes her dress and throws it where she has to walk out in her undergarments to collect it. When she tries to, he pulls her to his bed. She grabs a nearby knife and stabs him. This kills him.

Ondra walks all night, being bothered by what she did. She constantly sees signs of the murder that guilt her even more. She sees arms hanging the same way his did. She sees a marquee with a knife moving up and down, things to this effect. She finally arrives home and hurries to her room to pretend she has been there all night before her parents catch her.

Without getting any sleep she comes downstairs to her parent’s store to have breakfast. Her mother is played by Sara Allgood and her father by Charles Paton. They both notice there is something not right about her. Ondra isn’t hungry so she goes to run the shop.

Jones finds the body of Ritchard and Longden is one of the detectives on the case. He finds a glove he knows belongs to Ondra. He goes to the store to see her. The news of the murder is all over town as well.

Longden reveals to Ondra that he found her glove at the crime scene, but Scotland Yard does not know that he has it. They talk in a phone booth when they notice a man looking in on them. He comes into the store and reveals secretly to them that he has the other glove and he got it from Ritchard’s apartment. This man is played by Donald Calthrop. He then decides to blackmail the couple in order to keep their secret.

Jones goes to Scotland Yard and after being interviewed and looking through mug shots, she identifies Calthrop as the man that came to see Ritchard.

Calthrop is now wanted by Scotland Yard for questioning. Will Longden allow him to be interviewed? Will Calthrop keep the secret or tell the police what he knows? How far will this blackmail go? Will Ondra be able to keep her guilt in control?

I have to say that for being from the 1920s, I really liked this film. I thought the story is a very interesting one. You have a young woman that makes a bad decision with a smooth talker who tries to take advantage of it. I think that Ondra would have been fine if she went straight to the police, because it could be self-defense. When you’re young, you make bad decisions and her reputation would have been tarnished as well as that of her parent’s. You also have a career criminal in Calthrop, using what he can to get ahead. There is also Longden who is a detective, but he is covering up a crime and committing an egregious one for his profession. I think the acting was good across the board and I really like the soundtrack. This is also considered to be the first ‘talkie’ picture from the United Kingdom as well, so some historical significance.

I can’t critique this film too much, because of when it came out. This was from the 1920s, when pictures were not all that long, because I think this film would have benefited from a subplot or two to help deepen the story. This film was also originally going to be a silent film, but the Jazz Singer came out which was the first ‘talking’ picture, so the studio approached Alfred Hitchcock about making this one as well. The very beginning of the film does not have any talking or cards to tell us what the criminal who is being arrested did and is borderline pointless. All it does though is establish that Longden is a detective with Scotland Yard.

I am also adding this film to the horror film research due to the struggle that Ondra has to deal with. She has the guilt of the crime she committed, and then she has to deal with a man blackmailing her and her boyfriend to keep it a secret. It is also a scary situation to be in when she goes to the man’s room and he attempts to rape her.

Now with that said, I would recommend this film if you like old thrillers or Hitchcock films. The acting is good for the time. The story is pretty complex for a film from the era which I also liked. I will warn you that this film is from 1929, so it is in black and white. It does have sound synced with it, but it does have moments of being a silent film as well. If you can get past that, I think you will enjoy this film. If this sounds good, I would say to view this film.